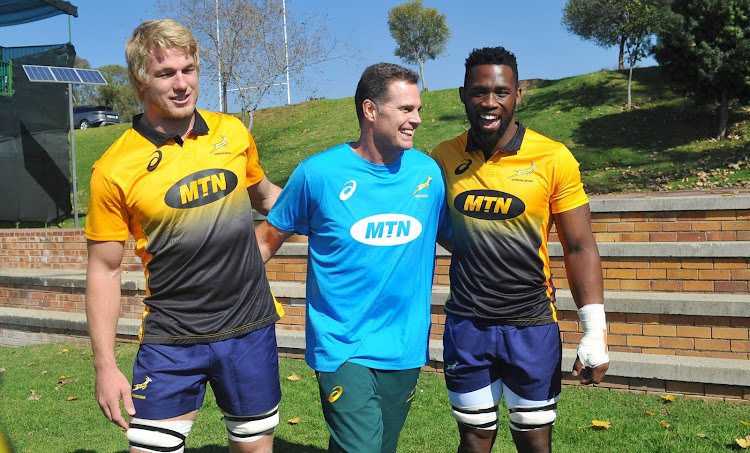 Springboks coach Rassie Erasmus says there is a lot of potential in the inexperienced side that will face Wales in a once-off Test match in Washington DC on Saturday night.

Erasmus said while the squad that includes seven uncapped players may be found wanting in terms of experience‚ he expects them to be competitive and to learn a lot from the trip to the US.

“Potential and talent is there in this team and we don’t have a problem in that regard‚" he said at the team’s camp in Johannesburg on Wednesday before the team departed for the US.

“It is with experience where we will have a little bit of a problem.

"(But) I don’t think we have a lack of talent‚ a guy like Embrose Papier is someone we can back for the next World Cup and beyond.

"We have tried to feed a lot of information to the guys so that they know what we are trying to do and they are thinking the same way.”

The seven players in the starting team who will be making their debut in the US capital are Travis Ismaiel‚ Makazole Mapimpi‚ Andre Esterhuizen‚ Ivan van Zyl‚ Kwagga Smith‚ Jason Jenkins‚ and Ox Nche.

A further six players with no Test experience in the form of Akker van der Merwe‚ Thomas du Toit‚ Marvin Orie‚ Sikhumbuzo Notshe‚ Papier‚ and Robert du Preez were included on the bench.

If Du Preez comes on as a substitute‚ it will be the first time in South African rugby history that a father and his sons - Robert (snr)‚ Jean-Luc‚ Dan and Robert (jnr) - don the Springbok jersey. For experience and leadership in his first squad as Springboks captain‚ Erasmus has opted for players like Jesse Kriel‚ Elton Jantjies‚ Oupa Mohoje‚ Du Toit and Chiliboy Ralepelle.

Pieter-Steph du Toit will captain the side.