Pollard in the Bok fast lane 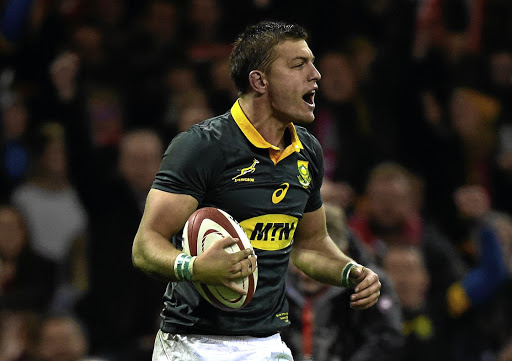 Handre Pollard is expected to feature prominently in the Bok set up leading into next year's Rugby World Cup.
Image: Reuters

The man who matters has confirmed that Handre Pollard will be a central figure for the Boks in the lead up to and during next year’s Rugby World Cup.

On Thursday‚ coach Rassie Erasmus was asked about the part Pollard might play on that journey to the showpiece event in Japan.

He reminded journalists that the Bulls flyhalf was part of a SA Under-20 team that won twice in New Zealand‚ when he had Andre Esterhuizen and Jesse Kriel as midfield company. Familiarity with those around you always gets a thumbs up.

“He’s a key man‚” Erasmus said of Pollard. “We’ve split them up for now but I see them playing together in the next 16 months prior to the World Cup.”

The average age of Rassie Erasmus’ side to play England at Ellis Park on Saturday is 25‚ but in perhaps a more illuminating pointer to the future‚ he ...
Sport
4 years ago

The coach didn’t want to create the impression he was shutting the door on the other contenders.

“Both he and Elton (Jantjies) will be important. We will look at a few others like Frans Steyn‚ Robert (du Preez) and Damian Willemse. We want to win but we also want to make sure players have enough caps when they get to the World Cup. Handre will be vital‚ however.”

In typically laidback fashion‚ Pollard was loathed to overstate the platform the series against England provided.

“I suppose this is an opportunity to cement your place in the starting team but it is not the focus. Once you start focusing on the individual stuff things go pear shaped‚” he said.

The familiarity Erasmus spoke of not only extends to Pollard’s outside.

“Unfortunately I didn’t get the chance to play with him in 2016‚” Pollard said of Faf de Klerk‚ the man who will start as his scrumhalf against England on Saturday.

“He’s very quick. He’s a very dangerous guy around the rucks. What he learnt in England now is the kicking part of the game. He’s matured a lot in that sense. He plays with a composed mindset. He trained like that the last few weeks and I’ve been impressed with him.”

Naturally‚ Bok fans are keen to establish what their general modus operandi will be under Erasmus. Pollard cautioned against adopting a Super Rugby playing style.

“You are going to get punished. We are not going to take away the individual brilliance each guy has. We’re going to give ourselves room to express ourselves. We play what we see. It is about executing.

“We’ve got a structure and we have plans. That doesn’t win you rugby games but it gives you confidence and direction but you still have to bring what you can to the party.”

Bok coach Rassie Erasmus on Thursday sought to flesh out the sketchy details of Bismarck du Plessis and Frans Steyn’s sudden withdrawal from the ...
Sport
4 years ago

Pollard said he was “in a good space”‚ grateful to be injury free. He may even shift into midfield on Saturday to allow Elton Jantjies a run at flyhalf in front of his home crowd.

“It is a possibility. We have been training like that. It is not something that we have put a big focus on. I don’t mind playing 12. I enjoy it there.”

Fellow midfield combatant Owen Farrell will captain England from inside centre this weekend‚ with George Ford starting at pivot. It’s Farrell of whom Pollard is particularly wary.

“World-class. That is probably the only way I can describe him. He’s a great player. He’s shown it year in and year out. He kicks brilliantly to poles. I have a lot of respect for him. I’m looking forward to going 80 minutes against him."

Five England players to watch against the Springboks at Ellis Park

Although England have struggled recently and they are in South Africa without a host of injured players‚ coach Eddie Jones still has a formidable ...
Sport
4 years ago

Springbok coach Rassie Erasmus on Thursday announced his team to play England in the first Test at Ellis Park on Saturday.
Sport
4 years ago