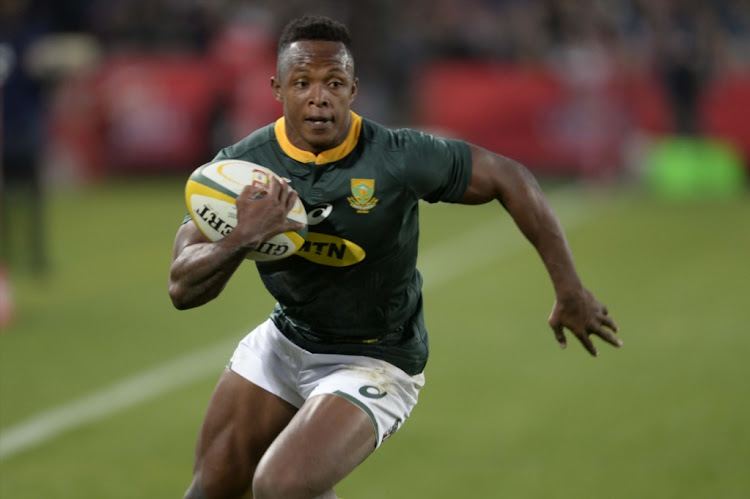 Sbu Nkosi of the Springboks during the test match between South Africa and England at Ellis Park on June 09, 2018 in Johannesburg, South Africa.
Image: Lee Warren/Gallo Images

It might be the exuberance of youth‚ or supreme confidence in both his and the Springbok team’s abilities‚ but wing Sbu Nkosi always believed the Boks would prevail against England at Ellis Park on Saturday.

The tourists made a blistering start to the high-octane match‚ running into a 24-3 lead inside 20 minutes before the Boks roared back to win 42-39.

Nkosi‚ 22‚ who went to school at Jeppe Boys High just 3km down the road from Ellis Park and snared a brace of tries on debut‚ said the outcome was never in doubt.

“We always knew we were going to win‚ but after that start we just needed to adapt our game‚” Nkosi said.

“We did that and we gained dominance as the game wore on.

“I wasn’t nervous in the beginning and even though we were on the back foot early on‚ the older guys kept us calm.

"They just said‚ ‘it’s Test match rugby and this does happen’.”

What happened was England rocked the Boks in front of 56,000 people with tries from wing Mike Brown‚ fullback Elliot Daly and centre Owen Farrell.

The Boks had expected an aerial assault from an England side whose backline was stacked with expert kickers from halfbacks Ben Youngs and George Ford‚ to Farrell and Daly.

But from the outset England attacked with ball in hand and exposed he Boks’ narrow defence out wide.

Passes on the outside beat Nkosi and fellow debutant Aphiwe Dyantyi on the left‚ as they came in off their wings.

Coach Rassie Erasmus shouldered most of the blame‚ saying that counterpart Eddie Jones had caught them out with the ball-in-hand approach.

But once the Boks changed their defence by not committing the wings to coming inside‚ and started dominating possession‚ the match turned.

Scrumhalf Faf de Klerk scored the home team’s first try to start the comeback and before halftime Nkosi scored twice – one in the right corner and one in the left – to give the Boks an improbable lead going into the break.

“After England made the first few breaks out wide‚ we had to adjust our defence‚ which wasn’t too hard to do‚” Nkosi said.

“But we had expected them to kick on us more than they did and that’s why we were out of position‚ but as soon as we adjusted‚ we handled it well.

“I guess we could look at what happened in two ways. The first is that we should start matches better.

“But the second is that we now know that we have the capability to come back from tough situations and that does a lot for our confidence.

“It was exciting and I did my best to stay calm after I scored my first try because it was still early in the game and I needed to remain focused on the job.

“I do remember every second of the game – it’s hard to forget with a burning chest because of the pace at high altitude.

"It was a memorable day and I won’t forget it.”