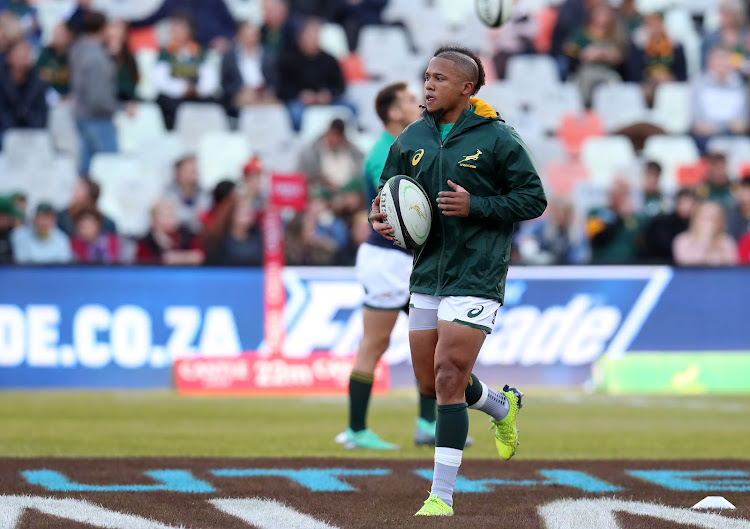 Flyhalf Elton Jantjies will have a chance to impress coach Rassie Erasmus after being named in the Springbok starting lineup for the third Test against England at Newlands on Saturday.

In all there are five changes to the starting team from last week while 37-year-old hooker Schalk Brits earns a place on the bench.

Warrick Gelant at fullback‚ Jesse Kriel and Andre Esterhuizen in the midfield‚ Jantjies at flyhalf and hooker Chiliboy Ralepelle are the changes to the team that won the second Test 23-12 in Bloemfontein.

After winning the first test 42-39 in Johannesburg the Boks have secured the series‚ which has given Erasmus some freedom to experiment.

Supersport announced on Tuesday that Nick Mallett and Naas Botha have been cleared of racism allegations by Advocate William Maleka's report into ...
Sport
3 years ago

Jantjies‚ who started in the 22-20 loss to Wales earlier this month‚ is preferred to Handré Pollard this weekend even though he has only played four minutes in the series.

He wasn’t even selected for the second Test in Bloemfontein‚ but Erasmus says that Jantjies’ role in the squad has been clearly defined.

“It’s seldom that I change a flyhalf in the game because he is the key decision-maker‚” Erasmus said.

“Even if he is making mistakes‚ I really like to keep the flyhalf on the field‚ which is why Elton had little time in the first Test against England.

After missing out on the second Test against England in what was described as a ‘rotational’ decision‚ flyhalf Elton Jantjies looks set for a recall ...
Sport
3 years ago

“The calculated risk last week‚ not to have a flyhalf on the bench‚ was that there were of a lot of young players such as wings S’Bu Nkosi and Aphiwe Dyantyi‚ and Gelant.

“The wings were camping late on in the game in the first Test and I just felt that Jesse Kriel could cover 13 and wing from the bench.

“And as I said‚ I don't like to change my flyhalf unless he is having a terrible game. Last week I had Willie le Roux and Faf de Klerk who could cover if Handré was injured.

“Elton is playing behind a very good pack now‚ an excellent scrumhalf and some outside back whom he is familiar with‚ so this is a fair chance for him.”

Brits (hooker) is on the replacements bench and is set to make his first Springbok appearance since the 2015 Rugby World Cup.

The promising young scrumhalf Embrose Papier‚ who made his Springbok debut off the bench against Wales in Washington‚ was also named among the substitutions.

Television sport commentator Ashwin Willemse will approach the Equality Court for relief following findings from an independent inquiry which cleared ...
Sport
3 years ago

With Jantjies back‚ the Bok backline has a new look with Esterhuizen and Kriel combining in the midfield like they did against Wales.

“No one is out of the team because of a lack of form‚ the changes are due to our long term planning for next year’s Rugby World Cup as we continue to build squad depth and capacity‚” Erasmus said.

“The series might be won but we still have an important Test match on Saturday‚ against a very determined English side who will be looking to end the series on a high.

Warren Whiteley‚ the national captain before he got injured‚ and Malcolm Marx‚ one of the most influential hookers on the planet before he tore a ...
Sport
3 years ago