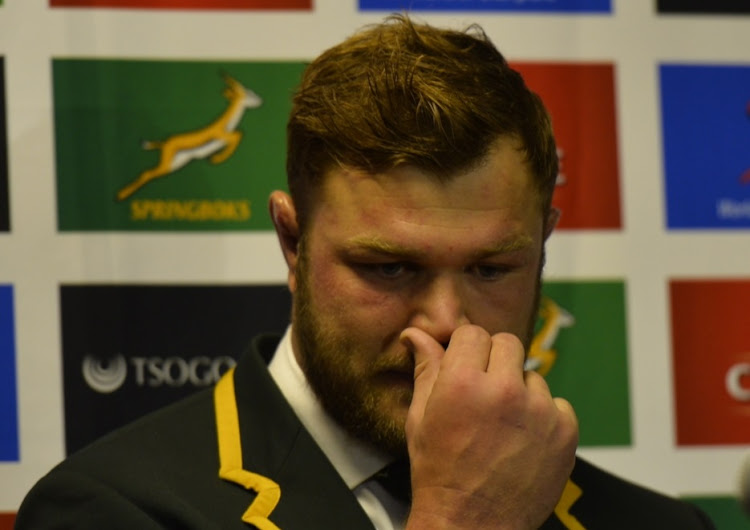 Springbok coach Rassie Erasmus confirmed that No 8 Duane Vermeulen would not be available for the Rugby Championships while describing his team’s performance as ‘terrible’ against England at Newlands.

The Springboks suffered a 25-10 defeat in difficult‚ slippery conditions to allow England their first win in SA since 2000. But the series was won going into the game.

We were terrible today‚ in my opinion.

Vermeulen‚ 31‚ was a colossal figure in the recent 2-1 series win and would have been a definite starter for the team against the All Blacks‚ Wallabies and Pumas.

TimesLive has learned that his failure to secure a contract in SA several months ago meant that he has signed for a Japanese club and as a consequence is restricted from representing the Boks.

Vermeulen refused to confirm where he would be playing in the coming months when asked directly.

“I am not available‚ that’s all I can say‚” Vermeulen said.

“It will be difficult to be away from the side now. I’ve spoken to Rassie and we’ve got a plan‚ and there will be an opportunity to discuss things further over the next few weeks.

“It’s great being back and pulling this green jumper over your head again and it’s great to be part of a young squad.

“These guys are just so excited to play for one another. I’m happy to be back‚ and hope to be a part of the side in the future Tests‚ just not in the Rugby Championship‚ but we’ll see what happens down the road.

“It a great team with a great captain in Siya [Kolisi]. It’s an exciting phase leading up to the World Cup. I would be happy to be part of that and give my 110%.”

In soaking‚ slippery conditions the Bok forwards were second best and behind the pack‚ flyhalf Elton Jantjies in particular‚ endured a nightmare game.

Erasmus admitted his team were ‘terrible’ and that they would only benefit from this setback if they learned from it and implemented what they learned positively when they next play.

Springbok coach Rassie Erasmus took some of the blame for flyhalf Elton Jantjies’ poor performance in the third Test against England at Newlands on ...
Sport
3 years ago

“We were terrible today‚ in my opinion‚” said Erasmus.

“We did learn a lot today‚ we knew we took a gamble and we looked at combinations but the things we got wrong had nothing to do with combinations‚ they were things that we could control such as discipline and breakdown play.

“It’s sad to say‚ we didn’t get up for this game. I will have to look at myself and how we prepared – maybe I made mistakes but we’ll have to analyse how the different players reacted to playing a different game in a different competition.”