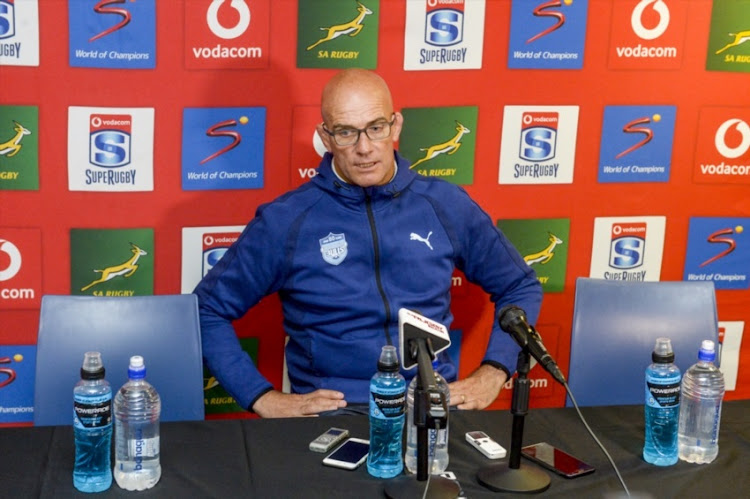 Coach John Mitchell of the Bulls during the Super Rugby match between Vodacom Bulls and Highlanders at Loftus Versfeld on April 28, 2018 in Pretoria, South Africa.
Image: Sydney Seshibedi/Gallo Images

Injury has forced Bulls coach John Mitchell to change his side's captaincy ahead of the trip to the Lions in their final Super Rugby match of the season at Ellis Park on Saturday.

Mitchell was forced to name Springboks lock RG Snyman as leader for the short trip across the Jukskei River after his national team-mate and flyhalf Handrè Pollard failed to respond well to treatment on a back injury.

Pollard’s injury is a double blow for Mitchell as he has been standing in for regular captain Burger Odendaal‚ who has been out with the calf injury he suffered while in action during the SuperSport Rugby Challenge last month.

Despite injury disruptions‚ Mitchell has challenged the squad to deliver a convincing performance on the occasion of their last Super Rugby match of the season as they have failed to make it to the play-offs after what has been a disappointing campaign.

“I asked the team for an extraordinary performance to close the season out.

The Sharks haven't quite been the masters of their own destiny this season and that partly explains why they find themselves in a difficult Super ...
Sport
3 years ago

"The other option is to just settle for an easy way to end the season but that is not who we are as a team‚”’ said Mitchell‚ adding that he is positive about the long-term plan to bring success back to Pretoria.

“There are a few things that have changed over the last year or so.

"I have given the talent in Super Rugby and Currie Cup a chance and I am better off after a year.

Snyman asked the players to end the season well against their rivals who will be looking to consolidate their position among the top teams on the overall standings.

With the Super Rugby league stage reaching the finishing line on Saturday‚ there’s still plenty to play for.
Sport
3 years ago

“One can expect the Lions to come out firing as they have everything to play for‚" he said.

"This will be a massive contest‚ a typical South African derby if you like.

"This gives us a proper opportunity to show what we stand for as a team one more time.”

In the other changes to the squad‚ Mitchell named Manie Libbok and Ivan van Zyl as the halfback combination. Winger Travis Ismaiel return to the starting line-up after regaining fitness with Divan Rossouw moving to the bench.

The coach also tinkered with the pack with Jannes Kirsten moving to lock and Thembelani Bholi coming in at flank while Ruben van Heerden has dropped out of the match day squad.

Uncapped hooker Johan Grobbelaar‚ lock Ruan Nortje and flyhalf Boeta Hamman were included on the bench and they are expected to make their tournament and Bulls debut.

The Sharks‚ who still have an outside chance of reaching the Super Rugby play-offs‚ would have to travel to Christchurch to face the Crusaders in ...
Sport
3 years ago