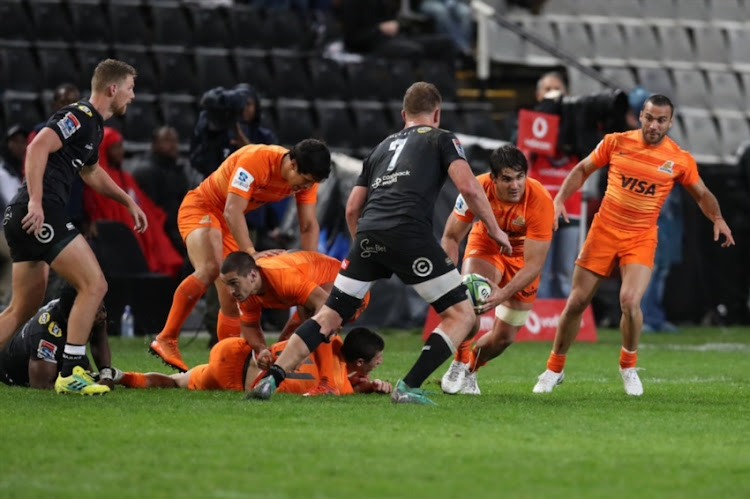 Pablo Matera of the Jaguares during the Super Rugby match between Cell C Sharks and Jaguares at Jonsson Kings Park on July 14, 2018 in Durban, South Africa.
Image: Steve Haag/Gallo Images

The Sharks predictably made heavy weather of their 20-10 triumph against the Jaguares on Saturday at King's Park Stadium but it was enough to book them a quarter-final spot.

Unlike last week, they made the most of the Rebels' 43-37 loss against the Highlanders but they weren't convincing.

The Jaguares, who were already assured of a play-off, will face the Lions while the Sharks earned themselves a date with the Crusaders in Christchurch.

Whether they'll have the class to beat the defending champions who are unbeaten at home remains to be seen.

The Sharks have an outstanding record against New Zealand sides this year but the Crusaders haven't dropped a game at home in two years while they've lost a combined six home matches in five years.

One of those defeats was against the Sharks in 2014, one of only two South African Super Rugby wins in the South Island rugby stronghold in 22 years.

While the cold and wet conditions weren't conducive to fluent rugby, the Sharks struggled to put together meaningful momentum against a second-string Jaguares side.

Despite their disappointing loss to the Bulls last week, the Jaguares gave their bench a decent run knowing a sterner test lies awaits at Ellis Park.

While they clearly lacked for motivation, they made up for that with reasonable endeavour as they dominated the match statistics.

They did not have try to show for their first half efforts but were robbed of a penalty try in the 39th minute when Curwin Bosch clearly held back Matias Moroni after the Sharks coughed up possession in their own half.

The ball narrowly beat Moroni to the dead-ball line and the Sharks breathed a massive sigh of relief.

Amazingly, the Sharks scored the only try of the first half through explosive hooker Akker van der Merwe in the 22nd minute while they were a man down.

While Van Der Merwe broke away from a maul to score, eighth-man Daniel du Preez was doing sin-bin time for a chop-tackle on Jaguares lock Tomas Lavanini.

The scrappy nature of the game didn't change in the second half even though the sides scored brilliant tries.