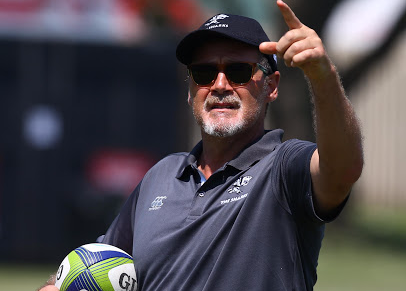 Sharks coach Robert du Preez is optimistic ahead of their Super Rugby quarterfinal against the Crusaders‚ saying it will be a wonderful opportunity for them to do well.

The Sharks snatched the final play-off spot when they beat the Jaguares 20-10 at a cold and wet King's Park in Saturday afternoon.

The Sharks‚ who have beaten three of the four New Zealand teams they have faced this season‚ did not face the Crusaders in the regular season.

Du Preez's inconsistent side will be up against it as only two South African teams (Bulls in 1996 and Sharks in 2014) have won in Christchurch.

No South African side has won a play-off in New Zealand since the inception of the competition in 1996.

Du Preez though is fully aware of the danger posed the defending champions and log leaders. The Crusaders haven't lost a home game in two years and have only lost six home games in the past five years.

"It's a wonderful opportunity and a massive challenge.

"We're going to go out there to beat them‚ otherwise we should be staying at home. They're top of the log and they're a great side‚" Du Preez said.

"They keep the ball for multiple phases‚ they have some very good individual players and that I think is one of their strengths."

The Sharks won seven of their 16 league matches but Saturday's four-pointer against the already qualified Jaguares was their most important.

The Durban side wasted a golden opportunity last week when they lost to the Stormers in Cape Town after the Rebels were beaten by the Reds in Brisbane.

They watched on nervously on Saturday when the Rebels took an early lead against the Highlanders‚ but the New Zealand side won 43-37.

This left the Sharks‚ who were four points behind the Rebels after the morning's proceedings‚ with the straightforward task of just having to beat the Rebels.

Du Preez knew what his team needed to do and all that mattered was the win and less about how they achieved the milestone.

"It was a big day and it was quite stressful but we're just happy that we've got through the game and now we can focus on the quarterfinals. Winning was all important because I didn't care how we won‚" Du Preez said.

"We did what we had to do and we were accurate on defence. In games like these‚ if there's one opportunity‚ you have to take it and I think we did."