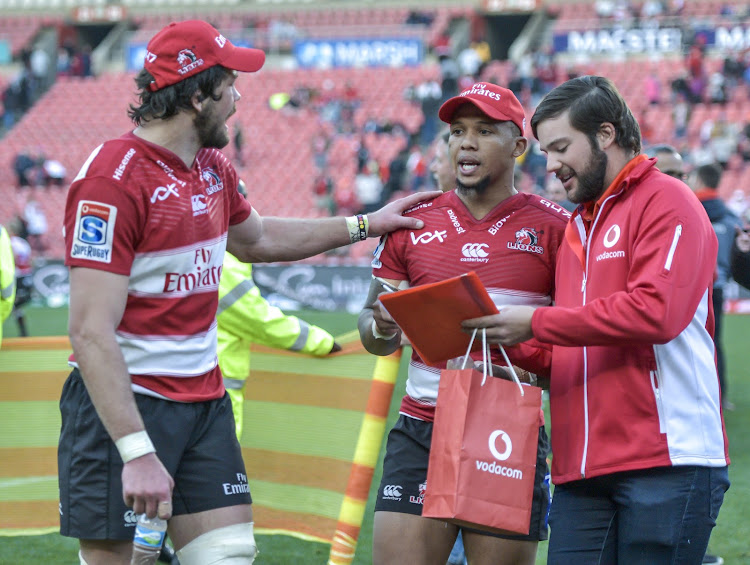 The Lions captain Warren Whiteley (L) congratulates Elton Jantjies on his man of the match award after a Super Rugby quarterfinal game against the Jaguares at Emirates Airlines Park Stadium, Johannesburg on July 21 2018.
Image: Christiaan Kotze/Backpagepix

They had barely vanquished the fiery Jaguares when the Lions turned their gaze to the Waratahs‚ with whom they are set to clash in a Super Rugby semi-final at Ellis Park on Saturday.

The Waratahs’ game plan is likely to be more cerebral than that of the Jaguares‚ and the Lions will be required to fight battles on different fronts on Saturday.

Lions captain Warren Whiteley expects the Lions’ back three to come under aerial bombardment from the ‘Tahs.

"They will probably kick a lot more.

The Blitzboks can never be accused of choking‚ especially in the light of the way they won the World Sevens Series for a third time earlier this year.
Sport
3 years ago

"At Ellis Park they’ll try and put our outside backs under pressure under the high ball with Israel Folau‚ so we can expect some high balls and contestables.”

Game management is something at which the Waratahs are particularly adept.

In the closing minutes of their 30-23 win over the Highlanders they controlled the tempo and flow of the game‚ perhaps even pulling the wool over the eyes of Australian referee Angus Gardner.

“They’ll probably try and slow the game down as well.

"They will try and buy some time‚” said Whiteley in anticipation of the effects of high altitude and long distance travel taking its toll on the tourists.

“The Waratahs have a lot of international players who have cool heads‚” noted Lions coach Swys de Bruin.

The Lions purred with intent, especially in the first half, as they surged into the semi-finals of Super Rugby for the third straight year on ...
Sport
3 years ago

“They were down and out and they came back (from 23-6 against the Highlanders). The yellow card helped them but we anticipate a Waratahs team that is right up there.”

Clearly‚ the Tahs’ have redeeming characteristics.

“They scored 73 tries in the league stages and were third.

"They know how to find your tryline‚” said De Bruin‚ wide eyed as ever to movement on the try scoring charts.

“When they get front foot ball they are extremely dangerous‚” observed Whiteley.

“They are direct‚ they have some good‚ strong ball carriers who are direct and give players like Kurtley Beale flat ball from which to attack. When he get flat ball he is dangerous.”

The Sydneysiders also pack a punch in the wider channels.

"Again the breakdown is going to be a contest‚ as well as the tackle fight and slowing down their ball.

"Of course the set piece as well. If you starve them of ball you don’t give them an opportunity‚” advised Whiteley.

The Lions may have home ground advantage and they may have kept the Waratahs scoreless in their most recent clash in Sydney earlier this season‚ but Whiteley and De Bruin are both wary of the vagaries of knock-out rugby‚ and indeed‚ the visitors’ prowess.

Malcolm Marx brilliant at Ellis Park as Lions march on

When he left the field he looked spent.
Sport
3 years ago

“That game was honestly one of the perfect days for us‚” said De Bruin of their 29-0 win earlier this year.

“Everything went our way‚ every bounce of the ball. It was a great game for us. They’ll be up for it. They’ll come here wanting to rectify their mistakes‚” said De Bruin.

“In semi-finals rugby you can’t just say somebody is going to win it‚” said Whiteley.

“We know they are going to come here guns blazing‚ with nothing to lose. If they are on‚ on the day‚ they can produce some quality footie.”

Thanks to all the Emirates Lions supporters who came out to Emirates Airline Park on Saturday!
We can't wait to see you again this week for the Vodacom @SuperRugby semi-final!#LetsUnite #LIOvWAR pic.twitter.com/XOi19bf860