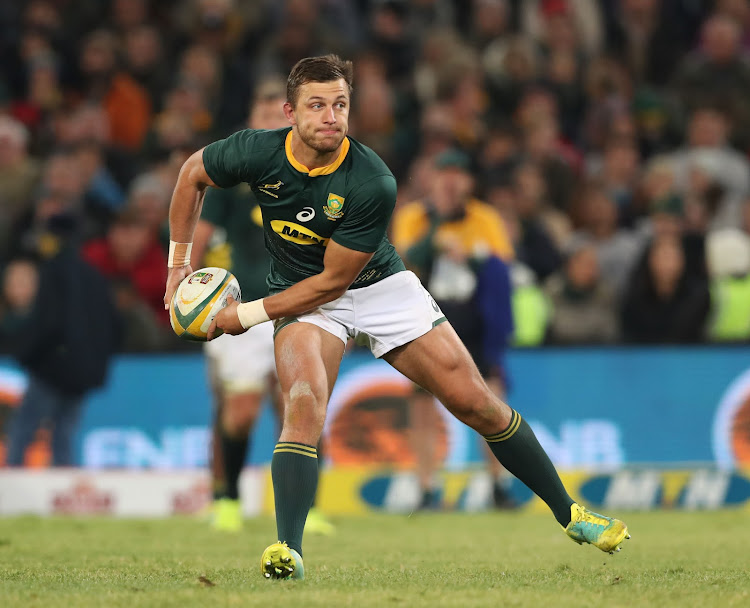 Handre Pollard of the Springboks during the international rugby match between South Africa and England at the Free State Stadium, Bloemfontein on 16 June 2018
Image: ©/BackpagePix

Springboks flyhalf Handrè Pollard is backing Siya Kolisi to continue as captain when the national team resumes their international commitments with the Rugby Championship next month.

The Boks take on New Zealand‚ Australia and Argentina between August and September and the Bulls pivot says Kolisi‚ who became South Africa’s first black African captain last month‚ has proved to that he is a good leader.

“Definitely‚ I will support the decision to make him captain.

"Siya captains the Stormers and he has shown that he can captain the Springboks as well‚” Pollard said at the launch of Castle’s Smash the label anti prejudice campaign in Johannesburg on Tuesday.

“He is a great player‚ a great guy and if he is given the responsibility to lead the team again‚ he has all our support.

"I know that he relishes the responsibility.

"On a personal level‚ we have always had a good relationship‚ we have massive respect for each other and for what we do.

"Whenever I feel I have to make a call he backs my decision and I do the same with him when he makes a call during the game.”

Pollard said the leadership group‚ which includes the likes of Tendai Mtawarira‚ Duane Vermeulen‚ Faf de Klerk and Willie le Roux‚ will continue to offer support to Kolisi on and off the field to ensure that the team is successful.

“As part of the leadership group in the Boks‚ we help each other to prepare and during matches‚ and that showed during the matches against England‚" he said.

"We took the pressure off him (Kolisi) on certain times when the going got tough and we will do it again if he is named as captain.

"When it is time to make decisions‚ we do that together and we take responsibility of what happens as a group.”

In the absence of the injured Warren Whiteley‚ Bok coach Rassie Erasmus named Kolisi as skipper in the three match series against England last month and he led the team to a 2-1 victory.

Whiteley has since recovered from injury and is available for selection.

Erasmus now has a tough call to make and he will have to name the man to lead SA in the championship and in the outgoing tour to Europe in matches against France‚ Scotland and Wales later in the year.

“Having Warren and Malcolm Marx is massive for us‚" Pollard said.

"Warren is a great player and leader.

"Malcolm is an absolute freak of a player and I am happy to see them back in action for the Lions.

"That is not to say that the guys who played in June did not step up to the plate against England.

"In the case of Malcolm‚ I just think he is the best hooker in the world at this stage.”