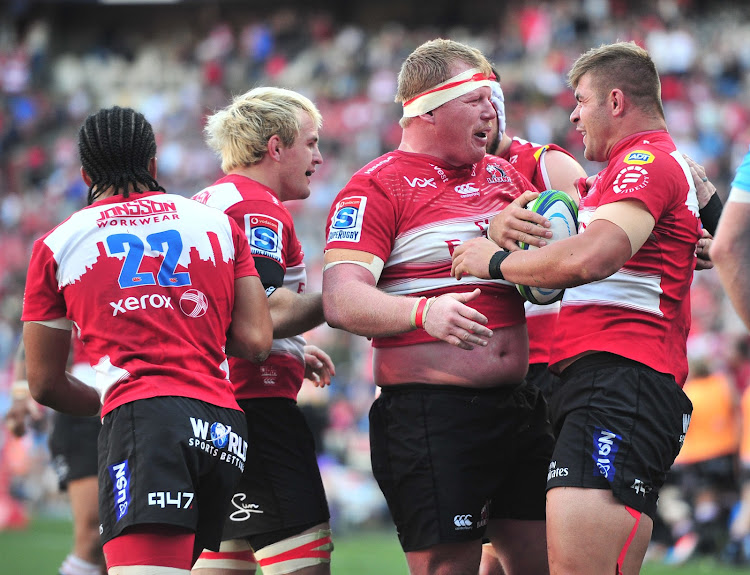 Malcolm Marx of the Emirates Lions celebrates teammates after scoring a try during a Super Rugby semifinal match against the Waratahs at Ellis Park Stadium, Johannesburg on July 28 2018.
Image: Samuel Shivambu/BackpagePix

Christchurch and the Crusaders loom for South Africa’s Lions on Saturday‚ and seldom in the world of sport have the odds been so stacked against a team supposedly on the same level as their opponents.

The Lions deservedly earned the right to play in the 2018 Super Rugby final against the eight-time winners and defending champions at the AMI Stadium next Saturday.

But history says they have no chance.

Finals should be matches where there is at least a hint of suspense and a modicum of hope for both teams.

But this match appears to be hopeless for the Lions despite their recent good form and their unquestionable claim to be in the southern hemisphere’s showpiece club game.

The Crusaders are an impossible opponent in their South Island stronghold.

It’s no wonder Lions coach Swys de Bruin said he believed in miracles‚ when asked about the prospect of winning in Christchurch.

Because it would be a rugby miracle if they won.

Since rugby went professional in 1996‚ the Crusaders have played four finals in Christchurch and won them all‚ although this will be the first Super Rugby final in that city since 2008.

In 20 play-off games in Christchurch‚ which includes quarterfinals and semi-finals‚ the Crusaders have won them all.

The Lions will be sweating on the availability of star left wing Aphiwe Dyantyi ahead of Saturday’s Super Rugby final against the Crusaders in ...
Sport
3 years ago

The narrowest winning margin in all that time was seven points when the Hurricanes lost the final 19-12 in 2006.

No team has even come within a score of winning a play-off match in Christchurch. It’s a staggering record.

In all games the Crusaders are on a 19-match home winning streak following a pool play loss to the Hurricanes in 2016.

In 22 years of Super Rugby the Crusaders have played 171 home matches and lost just 25‚ with four draws‚ winning 142.

They have an 82% winning record at home.

In 54 home matches against South African sides they have only lost twice‚ once against the Cats in Nelson‚ with the Sharks inflicting the Crusaders’ only Christchurch loss to an SA team in 2014.

If the Lions travel through 11 times zones‚ over 13,000km and somehow beat the Crusaders‚ it would not only rank as the greatest upset in Super Rugby history‚ but one of the greatest in all sports.

Japan’s win over the Springboks at Rugby World Cup 2015 wouldn't even come close.

The USA’s 1-0 FIFA World Cup win over England in Belo Horizonte in 1950 might be the closest comparable upset in team sports.

The Crusaders simply don’t lose play-offs at home. The Lions will need a miracle.