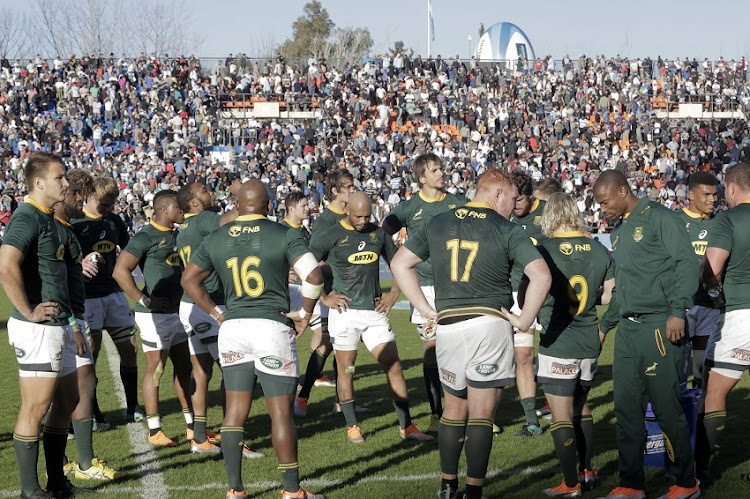 Players of South Africa look dejected at the end of a match between Argentina and South Africa as part of The Rugby Championship 2018 at Malvinas Argentinas Stadium on August 25, 2018 in Mendoza, Argentina.
Image: Daniel Jayo/Getty Images

In June Springbok coach Rassie Erasmus cautioned against over-optimism after his side beat England 2-1 in a home series, but even he couldn't of imagined such a humbling dousing of his team’s progress two months later.

The Boks 32-19 loss to Argentina in Mendoza last Saturday exposed many weaknesses, including South Africa’s inability to win away from home, while offering no obvious positives.

Post the 2015 World Cup, the Boks have won just three of 15 away games and their next two fixtures are in Brisbane and Wellington.

Slow starts in matches have characterised Erasmus’ Bok reign. While his team was able to overturn heavy early deficits against England in the first and second Tests, and also against the Pumas in Durban last week, there was no way out of 27-7 halftime hole they found themselves in this week.

Australian referee Angus Gardner may have ignored the Pumas’ continual offsides infringements, and he may have been casual in his handling of the breakdown, but the Boks failed to adapt to the official and to Argentina’s ferocity. It’s as if foreign fields are some sort of kryptonite for the Springboks.

“We had so many opportunities to score tries in the first 15-20 minutes,’ Erasmus lamented. “We just didn’t capitalise on that.

“We played like a team that’s playing club rugby. I must point the finger at myself. When you play like this, the coach did something badly wrong during the week.”

At least Erasmus had the grace not to try and “take positives” from the defeat as his predecessor Allister Coetzee did after the Boks lost 57-0 to the All Blacks last year.

But Erasmus is quickly finding out how different and how difficult coaching at the cutting edge can be. He told all who wanted to listen in June that the Boks were learning and growing and would suffer setbacks along the way.

It felt then as if he was getting his excuses in early, and the performance in Mendoza bore them out.

The Boks’ defence was appalling, 27 missed tackles, especially in the first half, while the lineout again malfunctioned. There was also a lack of intensity at the contact points.

Dropping Pieter-Steph du Toit after the 34-21 win in Durban, now looks like a poor selection decision because the Stormers man was immense when he joined the battle in the second half. Just as he had been at King’s Park.

After a storming return to rugby in Durban, Eben Etzebeth was subdued and No 8 Warren Whiteley was virtually anonymous. It’s no wonder Erasmus has apparently sent as SOS to Duane Vermeulen in Japan.

Inside centre Andre Esterhuizen is quickly being found out at Test level, where he has offered little more than being a bludgeon while Willie le Roux had one of those days when he went AWOL.

“It’s not an excuse, because we are picking and coaching the team,” Erasmus said. “But with Mapimpi going off and Lionel [Mapoe] having to go to wing, and Aphiwe [Dyantyi] and Lukhanyo [Am] being youngsters, they’re going to go through these games when they are rattled and they have to learn how to handle it.

The Boks face Australia in Brisbane next and Erasmus has no more credit left in the bank. He has to shelve extreme experimentation and look to find his best team and stick to it for the rest of the Rugby Championship.

“We had certain plans that we wanted to try against Australia, but that’s out the window now,” Erasmus admitted. “We have to get back to winning ways again, it’s win at all costs now.

"This puts us back quite a bit. We wanted to win this game [in Mendoza] and give a few other guys a chance against Australia, but we can’t do that now.”