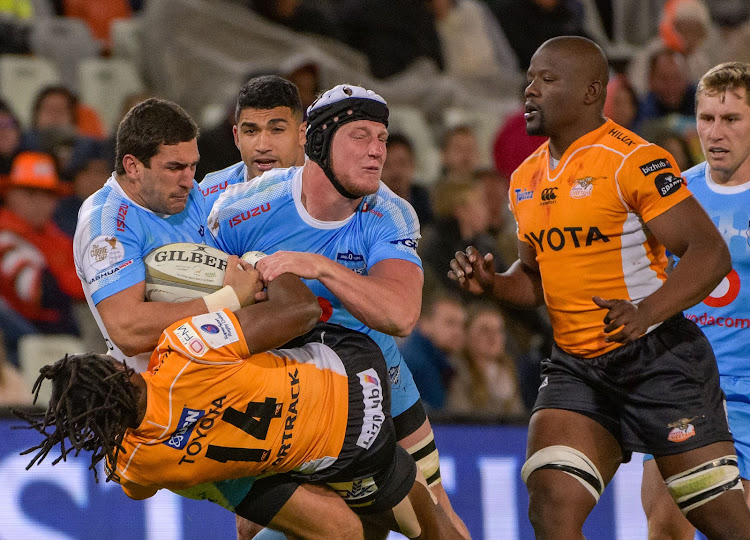 Divan Rossouw and Hendre Stassen of the Blue Bulls with Rabz Maxwane (No.14) and Oupa Mohoje (R) of Toyota Cheetahs during the Currie Cup game at Toyota Stadium in Bloemfontein on August 17 2018.
Image: Frikkie Kapp/BackpagePix

They feared the worst and on Wednesday the Cheetahs confirmed that their captain Oupa Mohoje would be out for nine months.

The loose forward sustained an ACL tear in his right knee in the Cheetahs’ 38-0 defeat at the hands of Munster in Limerick in a Pro14 match last Saturday.

He returned home on the weekend so that a clear diagnosis could be performed.

Earlier this week coach Franco Smith said the injury was of a serious nature and his fears were confirmed after a scan.

Mohoje‚ who has played in 19 Tests‚ has been replaced by Gerhard Olivier in the Cheetahs’ squad‚ while scrumhalf Shaun Venter is expected to wear the captain’s armband.

The Cheetahs play the Ospreys in a Pro14 match in Swansea on Saturday.

It’s either a hint of panic‚ but more likely a continuation of his desire to build depth and experience that Springbok coach Rassie Erasmus is set to ...
Sport
3 years ago

No better time to be at the Lions, says defence coach Joey Mongalo

As a defence coach it is perhaps to be expected for Joey Mongalo to stand his ground on the virtues of the Currie Cup.
Sport
3 years ago