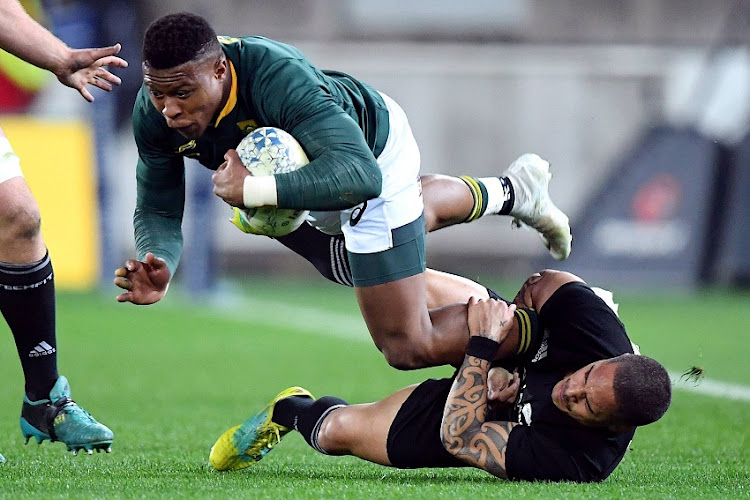 Aphiwe Dyantyi has refused to take the credit after scoring two tries in the Springboks' 36-34 Rugby Championship win against the All Blacks at the Westpac Stadium on Saturday.

Dyantyi‚ who is widely regarded as one of the hottest properties in world rugby‚ brought the Boks back into the game after they went 12-0 in the 21st minute and he helped South Africa pull away to 36-24 in the second half.

He also produced a possible match-saving tackle on the imposing Kieran Read‚ who spilled the ball‚ with the All Blacks captain in a good position to score a try and put South Africa under pressure.

Speaking after his eye-catching performance‚ the Lions winger put the famous victory down to team effort and warned against over confidence as they still have two more remaining matches at home in the competition.

“Obviously it feels great to have managed to score two tries against the All Blacks but the important thing was to come to New Zealand and get the result as a team‚” he said after the match.

“We can’t get ahead of ourselves because we still have two matches to play back at home.

"We will definitely enjoy this win because not many teams come here and win‚ but we still have a lot of work to do.

"We must immediately press the rest button and focus on those remaining two matches.”

Asked to explain how they managed to remain calm after New Zealand took an early 12-0 point‚ Dyantyi said they discussed the importance of staying in the moment and not losing focus against the well drilled All Blacks.

“Throughout the week‚ we focused on not switching off at any moment in the game because if you do that they will pounce on you‚" he said.

"We needed to stay in the moment and that was the message during the week and during the game.

"We had to grind out there and at the end we managed to get the win‚” he said‚ adding that it was a tough day at the office and the win will do a lot for their confidence.

“This win will do a lot for us in terms of confidence because we are coming from two losses.

"We were playing against the All Blacks and it was very tough out there and you know the rivalry between the two nations is titanic.

"If you look at the past two Tests where we lost to Argentina and Australia‚ we had many chances and did not capitalise on most of them.

"In this match we had about six and capitalised on five and we are always trying to improve because this is Test rugby.”