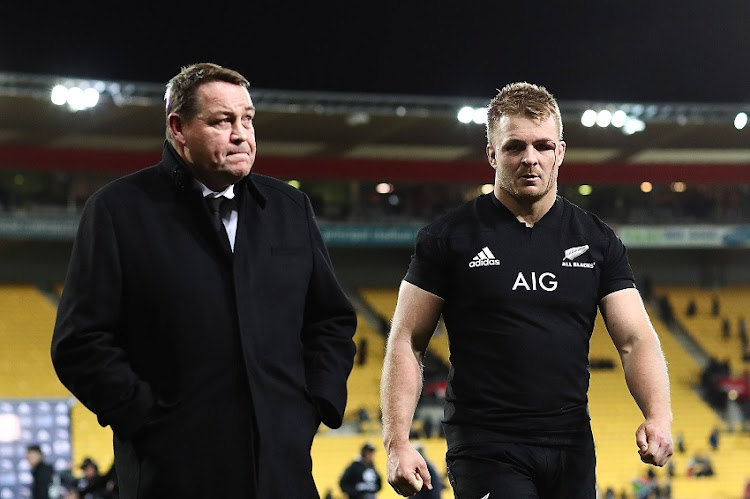 Head coach Steve Hansen walks off with Sam Cane of the All Blacks after losing The Rugby Championship match between the New Zealand All Blacks and the South Africa Springboks at Westpac Stadium on September 15, 2018 in Wellington, New Zealand.
Image: Hannah Peters/Getty Images

All Black coach Steve Hansen conceded that his team were beaten by a superior opponent on the day when the Springboks earned a famous 36-34 win over the world champions in Wellington last Saturday.

The victory has been widely celebrated‚ as it was the Boks’ first in New Zealand in nine years‚ and added spice to the return fixture in Pretoria in three weeks.

Hansen‚ more than anybody, knows that his team didn’t have their best day because they were pressurised in a way no team since the 2017 British & Irish Lions managed to do to them.

The loss‚ while stinging‚ will only serve to galvanise the All Blacks.

Argentina‚ whom they face next‚ are going to suffer the brunt of the backlash.

The Boks should also be wary of an improved performance when the sides meet again.

"When you're used to winning all the time‚ as we are‚ I think it's really‚ really important that you show the same range of emotions as when you win.

"You've got to stand up and be counted and thankfully I think [the players] have done that.

"I don't think they've been poor losers. I think they've accepted the fact that they got beaten on the night by a team that played better than we did."

The Boks‚ as laudable and impressive as their win was‚ now have to show that they can reproduce that level of intensity and skill every week‚ starting with the Wallabies in Port Elizabeth on September 29.

No team does backs-to-the-wall like the Boks but now that they have achieved something special it has to become the new normal and they have two home games to build on their victory.

Coach Rassie Erasmus‚ after tinkering for eight Tests‚ should be settled in his mind on the identity of his best 23.

After using six different front row combinations‚ four looseforward combinations and five centre pairings as well as four back three combinations; the time for experimentation is surely over.

But nothing is simple or straightforward for the Bok coach.

Fullback Willie le Roux and scrumhalf Faf de Klerk might not be available due to English club commitments. Le Roux was cagey when asked if he would play against the Wallabies and All Blacks at home.

“It’s a tough one [to answer] at the moment‚ but you never know what can happen‚” Le Roux said when asked about his availability.

Injuries to centres Damian de Allende and Lukhanyo Am might rule them out of the coming matches‚ which could dictate midfield selection. But even so‚ the team appears to be taking shape.

An emergency call to Montpellier centre Jan Serfontein is not out of the question and Ulster flank Marcell Coetzee might also be approached.