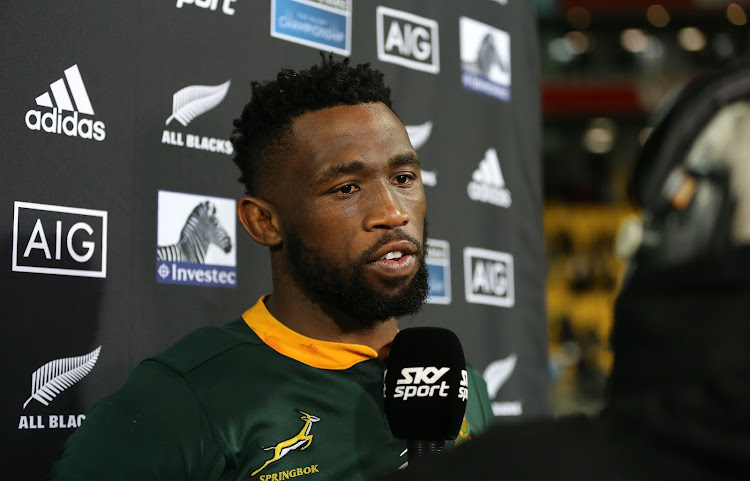 Saturday’s landmark Test win against the All Blacks may not have sunk in yet for Springbok captain Siya Kolisi but the loose-forward acknowledged that there’s plenty of work that lies ahead in the last two Rugby Championship matches.

Through their 36-34 win at the Westpac Stadium in Wellington‚ South Africa became the first Test team to beat New Zealand at home in nine years.

It was a win that allowed Kolisi to enjoy the post-match media engagement‚ something a number of Springbok captains haven’t been able to do in the Land of the Long White Cloud.

“It hasn’t quite sunk in yet but we have to be normal about it‚" Kolisi said.

"It was very exciting and the guys were emotional after the game‚ but we’ve just been moving normally after the game. We weren’t on our phones.

"We had to work hard and focus on the job at hand and that’s all we did.

“It was a little bit easier going into the press conference after winning.

"But the most important thing I took out was that we still had the same burning desire that we had in the Newlands Test‚ but the way we worked with each other was I think the most perfect thing.”

Kolisi had to watch from the bench in the second half as the Springboks showed defensive steel that hasn’t been associated with them in the past two years.

The Springboks fought back from an early 12-0 deficit to lead 31-17‚ but the inevitable All Black resurgence meant the Boks had to fight for every inch to keep Steven Hansen’s side at bay.

That also included losing Willie le Roux for 10 minutes late in the second half‚ but Kolisi said he didn’t lose his nerve.

“For some reason‚ I wasn’t too nervous‚" he said.

"You know when you know and we felt it.

"We prepared well and you could see the guys were defending well.

"Obviously you are nervous and sometimes you get lucky in a game.

"We did have a bit of luck in the game but we were confident the guys would make the tackles.

"It means that we’re growing and getting better as a team‚” Kolisi said.

South Africa has a week’s grace before preparing for their next week’s assignment against Australia in Port Elizabeth.

It will be a home-coming of sorts for the Port Elizabeth-born Kolisi‚ who has won both Tests that he’s played in his home town.

The Springboks have a mathematical chance of winning the Rugby Championship but they’ll need the Pumas to deny the All Blacks victory while also preventing them from getting any bonus points.

Before that happens‚ the Springboks will have to earn a win against Australia‚ something they haven’t been able to do in three attempts over the past two years.

Kolisi knows they can’t afford to rest on their laurels‚ especially after their two iffy performances in Mendoza and Brisbane.

“It’s a simple thing for us now‚" Kolisi said.

"We have to keep on working hard because hard work brought us the win and a bit of luck.

"We just need to keep on working harder and keep on improving.

"I think we grew a little bit in this game and that’s what we want to keep on striving for.”