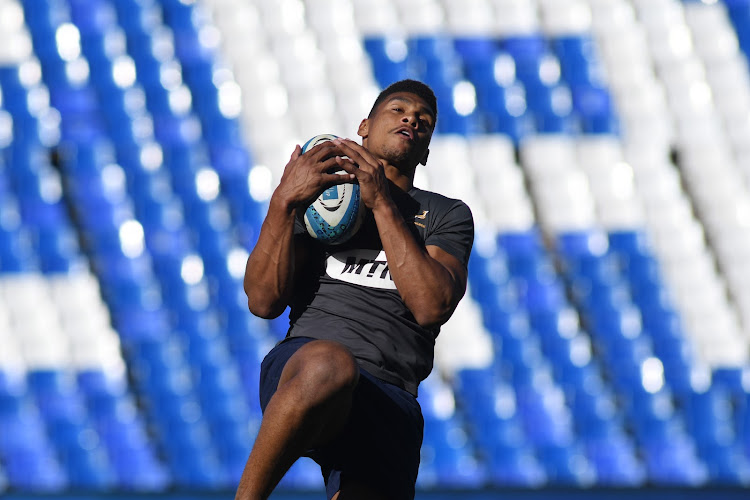 Damian Willemse goes through his paces during the captain's run, before the Rugby Championship match between Argentina and South Africa at Malvinas Argentinas Stadium, Mendoza on August 25 2018.
Image: Hernn Barrios/BackpagePix

Damian Willemse will start at fullback for Western Province against Griquas at Newlands on Saturday in his first Currie Cup outing of the season.

According to WP coach John Dobson‚ Springbok counterpart Rassie Erasmus requested to see Willemse at fullback‚ giving an indication where the youngster might be deployed in the coming Rugby Championship matches against Australia and New Zealand.

“There was a very polite request from Springbok management to play Damian at fullback this weekend‚” Dobson said. “They wouldn’t have minded if we didn’t but asked if we could.

“He played fullback in the Currie Cup final last year. But more importantly in the modern game flyhalves and fullbacks alternate and often 15 is at first receiver‚ so we are excited.”

Hooker Bongi Mbonambi‚ prop Wilco Louw‚ flank Sikhumbuzo Notshe and Willemse have all been released from the Springbok squad and are joined in the starting lineup by a fit-again JJ Engelbrecht.

Western Province look for their fourth straight victory of the season.

Mbonambi and Louw join Ali Vermaak in the front row‚ with Caylib Oosthuizen‚ Scarra Ntubeni and Michael Kumbirai on the replacements bench.

Salmaan Moerat partners captain Chris van Zyl in the second row‚ while Notshe links up with Kobus van Dyk and Juarno Augustus in the loose trio.

There are three changes to the backline‚ with scrumhalf Herschel Jantjies making his first start of the season‚ Engelbrecht on the left wing and Willemse at fullback.

“The only voluntary change‚ if you like‚ is lock JD Schickerling sitting out. When you have four Springboks back you play them‚” Dobson said.

“We need to give some players a chance in the shorter competition‚ and this gave us that opportunity.

“Herschel Jantjies gets a start and maybe the return of these Springboks will offset any loss of rhythm we might have had by making these changes.

“The only Bok who hasn’t played for us in the Currie Cup is Damian [Willemse]‚ so the changes won’t be so disruptive.

“We need to try and create some depth in case of injuries but one of the good things is that players such as EW Viljoen‚ Jano Vermaak and SP Marais aren’t even in the team this week. We will have some tough selections when we meet the Bulls in a few weeks.”