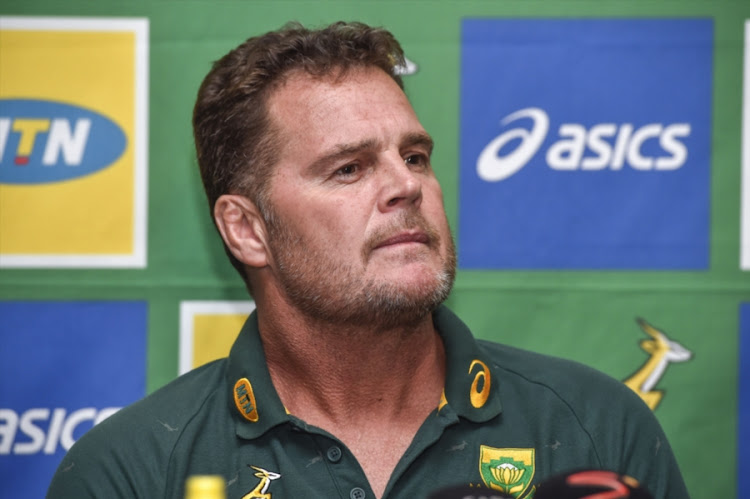 Erasmus made three changes to the starting line-up on Thursday when he named the squad with Damian de Allende‚ Francois Louw and Steven Kitshoff back in the starting line-up and Sikhumbuzo Notshe‚ who started in the win over the Wallabies last weekend‚ dropping to the bench.

“When you play a team like New Zealand‚ you always pick your best possible available team‚” he said at the team's hotel in Pretoria‚ adding that he would continue to make changes in the coming Test matches.

“I am not sure if we want to settle on our best right now because the World Cup is still months away.

"There are a lot of guys who must still come back from injuries‚ Super Rugby still has to be played and there is the end of year tour.

"So‚ there are a lot of things we want to try.

"Look at the All Blacks‚ they have a new centre combination and up until the World Cup‚ we still make a few changes.”

Erasmus is aware that the All Blacks are hurting after their loss to the Boks in Wellington and he expects them to come out with guns blazing at Loftus.

“It is always tough against the All Blacks but our preparations this whole week have been good‚" he said.

"We beat them the last time and in Newlands it was very close.

"But they are the number one ranked team in the world and they are giving everybody 40 to 50 points.

“The team they have selected has sent the right message and we are expecting a physical and tactical battle.

"They have all the skills in the world‚ they will be hurting after that loss about three weeks ago and we expect them to give one hell of a performance.

"But we have to match them.

"The personnel they have picked has experience to handle the pressure.

"I am sure they have done their homework and we expect them to come with a different plan.

"We have been trying to work out what they are going to do but the tactical side is also going to be interesting."

The Springboks have flattered to deceive during this year's competition but Erasmus said there is progress and the bigger picture is to prepare a competitive side for next year's World Cup.

“There is progress and that is what we have been striving for since we started in June‚" he said.

"We have a chance to beat the number on team in the world again and our aspiration is to be one of the best teams in the world‚ but I know it’s easier said than done.”

The pervasive influence of Television Match Officials (TMO) in rugby is set to be curbed when World Rugby trial some limiting measures on the fourth ...
Sport
3 years ago