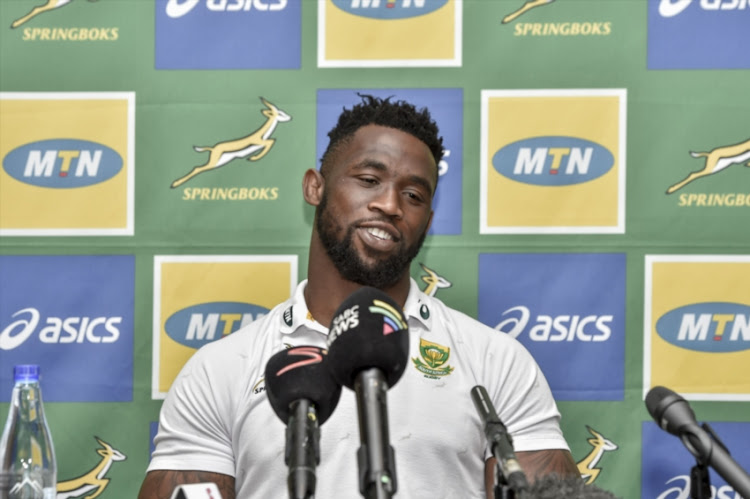 Siya Kolisi’s final press conference ahead of the crunch Rugby Championship clash against old foes New Zealand at Loftus on Saturday did not get off to a good start on Friday.

As soon as he had taken his seat in front of a packed media room at the team’s hotel in Pretoria‚ the Springbok captain realised that he had misplaced his wallet and asked the media officer to make a call to one of the members of the team management to find it.

It was found out that Cheslin Kolbe kept it safe.

Kolisi‚ though‚ has no intentions of misplacing his focus in front of a packed Loftus where the Boks have an opportunity of registering a rare double over the mighty All Blacks.

If the Springboks win in Pretoria‚ they will register their first back-to-back victories over the All Blacks since 2009‚ and Kolisi admitted that for that to happen they must be at their very best in all departments.

“We have worked hard since the win in Wellington but our mission is to continue to get better in every department every single week‚” he said.

“Coming into this match‚ we know that the All Blacks have already won the Rugby Championship but they have said it already that they want to win this game.

“We also want to win this because we are at home but we know that it is going to be a physical game. You can feel outside on the streets that people are excited and we are looking forward to it.”

Kolisi added that the South Africans are ready for a high intensity matchup because the All Blacks have made it clear since they arrived in the country that they want to end the season on a high.

“They have made it clear that they want to get revenge and we don’t want to be shocked by their intensity‚” he said.

“We want to be good from the beginning and not wait for a few minutes to get into the game‚ which is what we have done a few times in the past few matches.

“We understand that people were hurting because of the two matches we lost in a row to Argentina and Australia‚ and it is normal with people who feel something for the team.

“We were also feeling it but for people to come out in Port Elizabeth to that kind of support was amazing.

“We could feel the singing during match and it is exciting to see people believing in us again. It is showed by the fact that Loftus is sold out‚” he added.

The Boks’ preparations have gone smoothly during the week and Kolisi will not want any last-minute disruptions like misplacing his wallet.