All Blacks coach Steve Hansen happy with his bench's performance 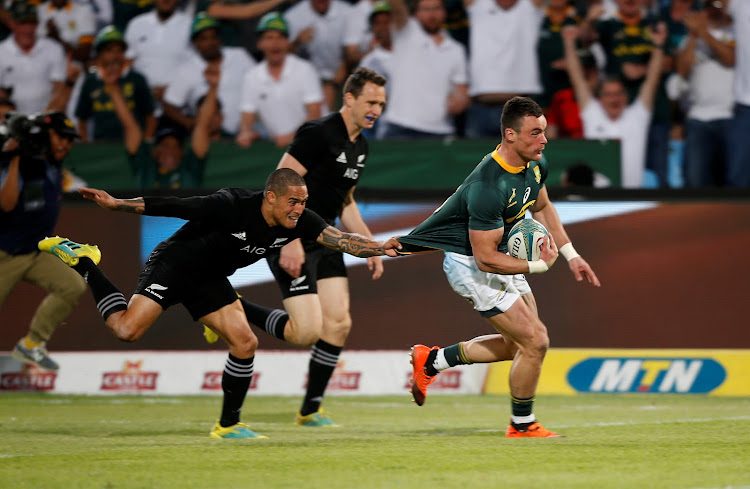 South Africa's Jesse Kriel evades a tackle on his way to scoring a try during the Rugby Championship match against Nea Zeland at Loftus Versfeld in Pretoria October 6, 2018.
Image: REUTERS/Siphiwe Sibeko

His hand was partly forced but All Blacks coach Steve Hansen was content that his bench did everything expected of them as they helped reel in the Springboks in the final quarter of their Rugby Championship clash at Loftus.

The All Blacks scored two converted tries in the last four minutes to snatch a dramatic 32-30 win on Saturday.

“The bench did what we asked them to do‚” said Hansen.

“They provided energy and purpose. Someone like Ardie (Savea) had to come on early.

"Richie (Mo’unga) came on and played well‚ and Patrick (Tuipulotu) did well. All of them did their jobs.”

The Springboks by contrast lost momentum once the men who helped put them in a favourable position were substituted by coach Rassie Erasmus.

Man of the match hooker Malcolm Marx‚ and dynamo scrumhalf Faf de Klerk watched from the sidelines as the All Blacks scored in the closing minutes.

“How you use your bench is a trump card‚” reminded Hansen.

“I think both teams have good benches. Rassie went deep into the game with his (starters) because he could afford to.

“You’ve got them there and you have to play them at some point. It is an art to come off the bench and do something. We train that a lot.

“You can’t keep playing everyone for 80 minutes because they run out of petrol‚ particularly a game that is as physical and as fast as this one.”

"You put pressure on guys when you play them for 80 minutes. They have quality players across the park. It is probably that point in time where they needed to change. I’m not sure.”