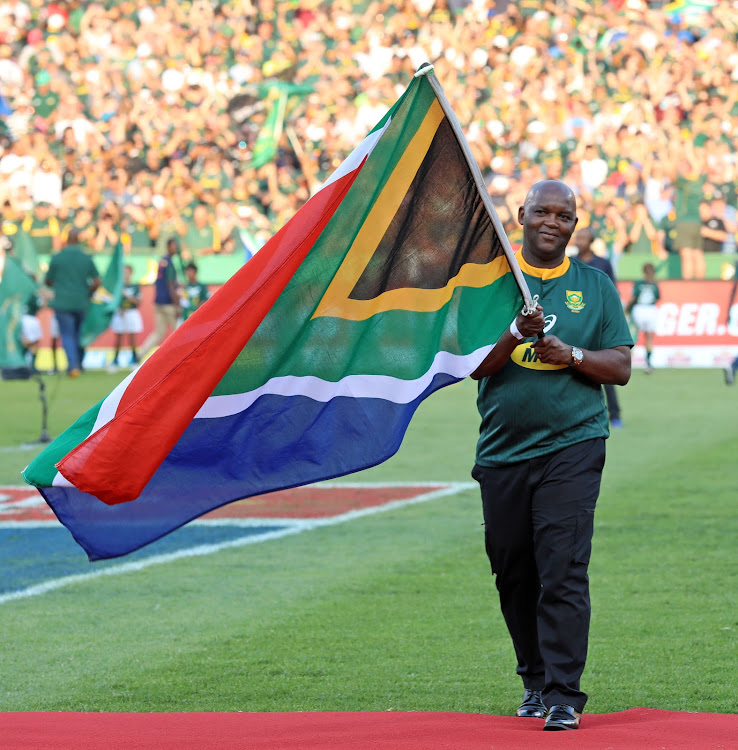 Pitso Mosimane has described carrying the SA flag out for Saturday’s Rugby Championship Test between the Springboks and All Blacks as one of the highlights of his life.

It was a poignant recognition for the 54-year-old soccer coach who has won three league titles domestically and took Mamelodi Sundowns to the 2016 Caf Champions League trophy.

The flag bearer is traditionally a leading member of society and Mosimane was asked to lead out both teams before the Test in Pretoria.

“It was unbelievable for me that SA Rugby should ask me to hold the national flag at a big game like that‚" he said.

"It was a really humbling experience.”

Mosimane also purred about the sellout crowd at Loftus Versfeld‚ the venue he prefers over Atteridgeville.

“I’ve never seen Loftus like that‚ as green as it was. And what a game‚” he said of the dramatic last-gasp defeat to the world champions.

“It was goose bumps when the national anthem started playing‚ another experience for me on another level. I think it’s one of my highlights as a person.

“You all know where we come from in our country‚ the background and history. So‚ it was an unbelievable experience.

“I just wish now to convince all those fans to come and also watch football‚” he added.

The flag bearer the week before when the Boks beat Australia in Port Elizabeth was Nelson Mandela’s former secretary Zelda la Grange.

Springboks give the All Blacks plenty to think about

Despite their disappointing finish the Springboks gave the All Blacks much to mull over in their 32-30 Rugby Championships defeat at Loftus.
Sport
3 years ago