WATCH | How Mgarimbe's Sister Bettina silenced the All Blacks' haka 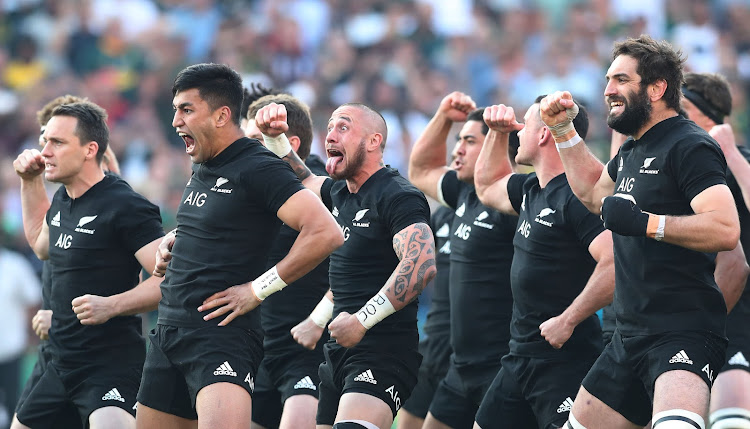 The All Blacks perform their pre-match Haka dance ahead of the Rugby Championship game between New Zealand and South Africa at Loftus Stadium in Pretoria on October 6, 2018.
Image: Gavin Barker/BackpagePix

Somehow the song took centre stage just before the kick-off of the South Africa/New Zealand Test that took place in the capital city on Saturday afternoon‚ much to the bemusement of fans.

However‚ this was a slick move planned by Algoa FM programmes manager Baydu Adams and DJ Denvor Apollus.

Adams‚ who also has a gay alter-ego called Bradshaw and has also featured as Brenton and Bredley on Kyknet's KLOP‚ wrote an open letter to SA Rugby pleading with them to counter the Haka or Kapa O'Pango with a song to shock the system.

His plea was well received by SA Rugby and Apollus shocked the fans with the classic hit.

The facial expressions were priceless‚ so were some of the reactions but the shift to a different music taste was highly welcome.

Adams‚ who was in attendance at Loftus and the previous week for the Wallaby Test at the Nelson Mandela Bay Stadium in Port Elizabeth‚ said the letter to SA Rugby was one that was purely out of jest and was happy that SA Rugby responded in the affirmative.

“I was so shocked and I realised I had to put it on video to record that it really happened.

"The DJ did say he'd have to find a clean version of the song‚ which he did. It was a fun thing that we did and next thing‚ they were playing the song‚” Adams said.

Apollus said Adam's letter‚ which he turned into a two-part video‚ surprised them but realised it was a fun challenge that was worth undertaking.

While the crowd didn't give the Kapa O'Pango the silent respect it deserve‚ Sister Bettina was greeted with silence in some parts and dancing and cheering in other parts of the 52 000-seater arena.

“When Baydu's letter came across the desk‚ we were like 'What's this?'

"But we decided to give it a try. I also realised that I know the song well and I had to edit it because it has a swearword when it starts but it was magnificent.

"There were pockets of people who's expressions were: What is this? But you could see some of the crowd realised the song was awesome and also derived some sort of answer to the Haka‚” Apollus said.

“Apart from everyone singing Ole‚ Ole‚ Ole‚ it almost felt like an answer to the Haka (Kapa O'Pango) at the start of the game. I felt really magnificent but it also was a team effort.”