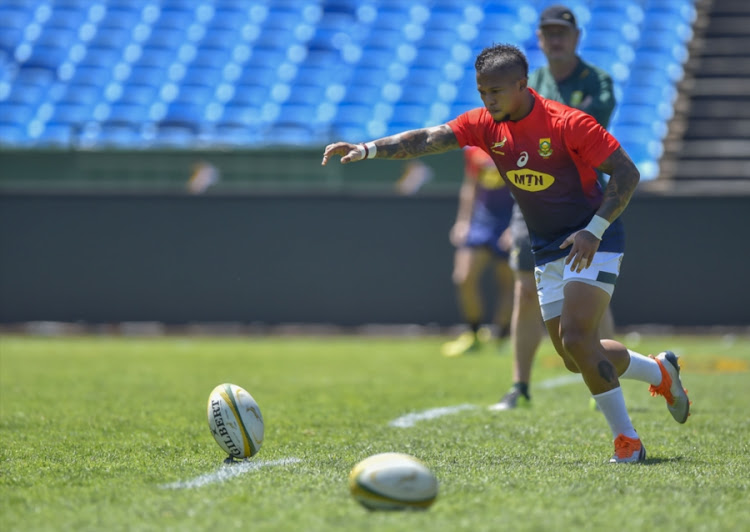 New Lions captain Nic Groom will have Elton Jantjies as halfback partner in Friday’s crucial Currie Cup clash against the Pumas in Nelspruit.

The match will effectively be an eliminator as the loser‚ especially if it is the Pumas‚ will miss out on a place in the semifinals.

Lock Franco Mostert‚ however‚ will miss the clash as he has been earmarked for mandatory rest after his exertions for the Springboks in the Rugby Championship.

No.8 Warren Whiteley and hooker Malcolm Marx are contracted with SA Rugby and can’t play in the Currie Cup unless the national coach feels they should.

Groom picks up the captaincy at a crucial stage in the season.

The Lions come off successive defeats to Western Province and the Sharks but they’ve had a three-week break to get back into the groove.

“We believe that to get on the other side of the result we need to put the work in‚” said Groom.

“We had great buy-in from the boys. The biggest thing is that we learnt from those two defeats. When you’re winning you’re not always learning.”

The successive defeats brought some sobering perspective and Groom was happy to share it.

“We played against two very good teams who were abrasive and physical. We lost the small moments in the game. The little one-on-ones. Those add up over a game.

“If we can be more physical and more abrasive we can give ourselves the time and space we need to play the attacking brand we want to play.”

On that score‚ Groom agreed that their 65-38 defeat to Western Province at Ellis Park was a jolt to the system.

“That is a tricky game to look at because I felt from the first minute we were under the pump. We didn’t rock up physically.

“I think we got bullied in a few spheres. After a good Super Rugby competition to lose a game like that at home was a big shock to the players. It stung.”

The Lions are in for another bruiser on Friday as the Pumas are also likely to bring a physical edge to their game.

“The Pumas will be in a mood‚” nodded Groom. “It is traditionally a very tough game for the Lions over there.

“They don’t have much to lose. Us generating momentum and us getting physical is within our capability.

“We have three weeks left to make something special of our season. Definitely the excitement is there.”

Rassie Erasmus says the Springboks are progressing very well and will be one of the top sides at the 2019 Rugby World Cup in Japan next year.
Sport
3 years ago