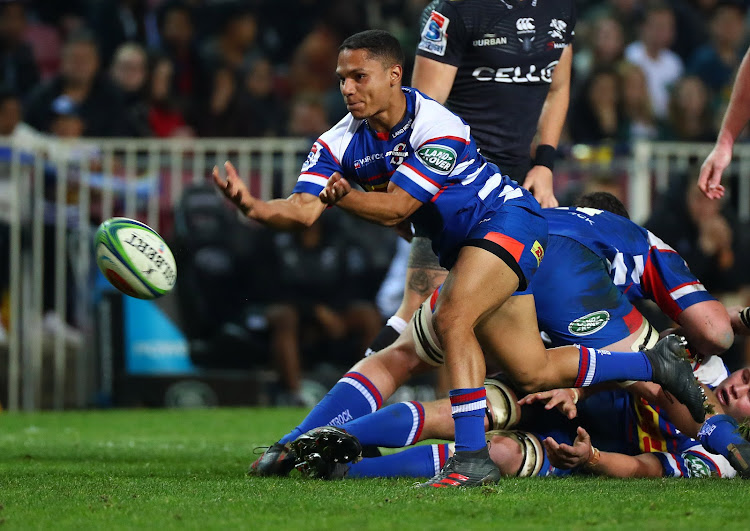 Herschel Jantjies of the Stormers in action at Newlands Stadium in Cape Town on July 7 2018.
Image: Chris Ricco/BackpagePix

Western Province youngsters Herschel Jantjies and Ernst van Rhyn are not daunted by the prospect of their first senior Currie Cup outings at Loftus Versfeld against the Blue Bulls this weekend.

The pair have both come on well at senior level during the current campaign‚ which sees Province sitting comfortably on the top of the standings after five wins in five outings.

Van Rhyn played lock for SA Schools and the Junior Springboks‚ but has been impressing as a blindside flank at Currie Cup level.

“I’ve never played a senior match at Loftus but it will be a huge moment‚” Van Rhyn said. “As a kid I used to watch the big north-south derby on TV so this will be a big match for me.

“We know the Bulls have a lot to play for and they will come for us‚ but we are looking forward to the challenge because we are preparing well.

“I played at Loftus a few times as a junior – twice I think at under-19 and under-21 – and both times we came away with narrow wins.

“I’m enjoying playing flank because I have more opportunities to play in the wider channels‚ which is adding strengths to my game.

“Pieter-Steph du Toit has been in the same position‚ but I haven’t had the chance to ask him about playing both positions. It’s something I will pick his brain about when I get the chance.”

Jantjies‚ who has impressed at scrumhalf with his pace and speed of service‚ was also relishing the chance to tackle the Bulls on their home turf at senior level.

With veteran Jano Vermaak out injured‚ Jantjies could find himself as the starting halfback for a match where Province only need one point to secure overall top of the log.

“If I’m selected this weekend it will be a real privilege because there is so much tradition in this game‚” Jantjies said.

“Loftus is similar to Newlands in that it’s a stadium with a lot of history‚ which makes the idea of playing there in a big game even more special.”

Jantjies was unsure who would start for the Bulls. They have the Springbok halfback pair of Embrose Papier and Ivan van Zyl to call on‚ and in Jantjies’s mind‚ both pose tough challenges.

“Ivan likes to play with momentum‚ liking to run with the ball‚ while Papier is very fast and looks to exploit that‚” Jantjies said.

“As a team we like to keep the ball in hand and look to score tries‚ which suits my style. I’m enjoying my rugby here and being given the chance to run good support lines on attack makes it enjoyable.

“My goal eventually is to play Super Rugby‚ but there is a lot of competition for the scrumhalf position here.”

Assistant-coach Dawie Snyman believes that the Bulls are not that different from the team that played in Super Rugby‚ despite losing coach John Mitchell to England. Pote Human has taken over the coaching.

“The Bulls have been a long time off and they have been building towards this game for several weeks so they will be well prepared‚” said Snyman.

“They have had a good Currie Cup even though there hasn’t been that much attention on them.

“They could have beaten the Sharks in Durban and they gave a good hiding to a strong Free State side [Pro14 strength] in Bloemfontein at the start of the competition. They lost narrowly to the Lions so they will want to prove a point at Loftus.

“John Mitchell has left them since Super Rugby but they have retained a lot of the strengths that Mitch introduced. They play with great tempo and also play with a lot of width.

“They also retain elements of the defensive approach that Mitch introduced. But Pote [Human] has done some good work on improving elements of their forward play.

“I’d say they boast a good blend of playing style and playing to their strong points and they will be difficult to beat.”