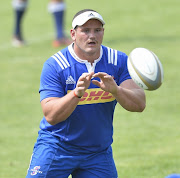 Western Province and Springbok tighthead prop Wilco Louw gave a scrumming master-class against the Blue Bulls at Loftus last week‚ but he not letting it cloud his expectations for the return encounter this week.

WP were leading 34-7 at halftime in the final Currie Cup Pool match of the campaign last Saturday when the match was called off.

As a half had been completed‚ it was designated a completed match and the result stood.

Victory for WP meant they secured top of the overall standings while the Bulls ended fourth place‚ to set up a return encounter in the Currie Cup semi-final at Newlands this weekend.

The WP scrum‚ with Louw in the vanguard on his 50th appearance for the union‚ decimated the Bulls’ pack last week‚ which saw the team award Louw the ‘vark hart’ for best performer.

Louw though‚ doesn't expect that it will be as easy as a week ago and fully expects the Bulls to come back at them.

“We are planning for this semi-final like we plan for all our matches‚” the Bok tighthead said.

“The Bulls will certainly come with some plans after last weekend‚ but we won’t change our approach.

“The weather conditions didn’t allow the game to pan out the way we expected‚ so I suppose I don’t feel like I’ve played 50 games for WP‚ rather I’ve played 49.5.

“Hopefully we can build on what we did last week and that the weather will allow for a better game of rugby than we saw last week.

“You want to use every opportunity you get‚ whether it’s in the Currie Cup or at Test level and this weekend is no different for me or for the Bulls players.

“I wouldn’t say we have the psychological upper hand because as rugby players you are always used to psyching yourself up.

"If things went badly one week‚ you use it as motivation for the next week‚ which is‚ I’m sure‚ what the Bulls will do. They want to put some things right.

“Players will take different lessons out of a rugby game. I can’t be sure what they will take out of last week’s game but we are expecting them to come back to prove a point.

“If I was badly scrummed by a team‚ I know I have the pride to say I want to come back and do better when I get another chance. I’m sure they will be up for that challenge.”

The Bulls might select Trevor Nyakane at loosehead after he started at tighthead last week. Nyakane has only recently been asked to play tighthead‚ having started his career as a loosehead.

“I take my hat off to Trevor because playing tighthead and loosehead is not easy‚” Louw said.

“They are two completely different positions and the fact that he is willing to play both says a lot about him.”