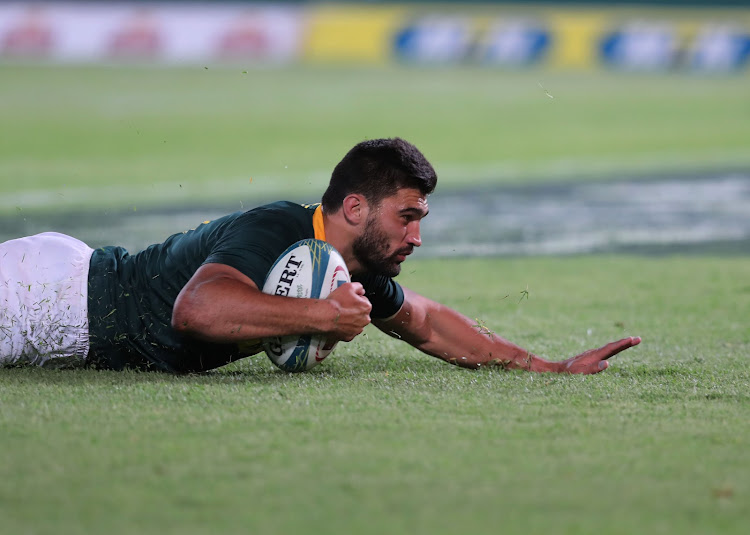 Damian de Allende of the Springboks scores try during the Rugby Championship match between South Africa and New Zealand at Loftus Stadium in Pretoria on October 6, 2018.
Image: Gavin Barker/BackpagePix

De Allende won the unions’ Most Valuable Player (MVP) award as well as the backline player of year for his efforts with the Stormers in Super Rugby and with the Springboks.

Petersen‚ who missed Super Rugby through injury‚ was named Most Promising Player after his try-scoring exploits in the Currie Cup‚ which has seen him score eight tries in six matches.

Among the juniors U19 fullback Quan Eyman was named WP Most Promising Player‚ scrumhalf Lucky Dlepu the WP U19 Best Back‚ prop Dian Bleuler the WP U19 Best Forward and lock Ian Kitwanga claimed the U19 Bounce Player of the Year award.

At U21 level‚ lock David Meihuizen was WP Most Promising Player‚ scrumhalf Jondre Williams the WP Best Back‚ prop Kwenzo Blose the WP Best Forward and skipper Nama Xaba was the U21 Bounce Player of the Year.

“Congratulations to everyone who walked away with awards this evening – it has been another busy year for the union‚ with our players showing their worth at all levels of the game‚” outgoing WPRFU president Thelo Wakefield said.

“The standards that we hold up in both amateur and professional rugby are testament to the many hours of hard work that are put in by rugby enthusiasts throughout Western Province.”