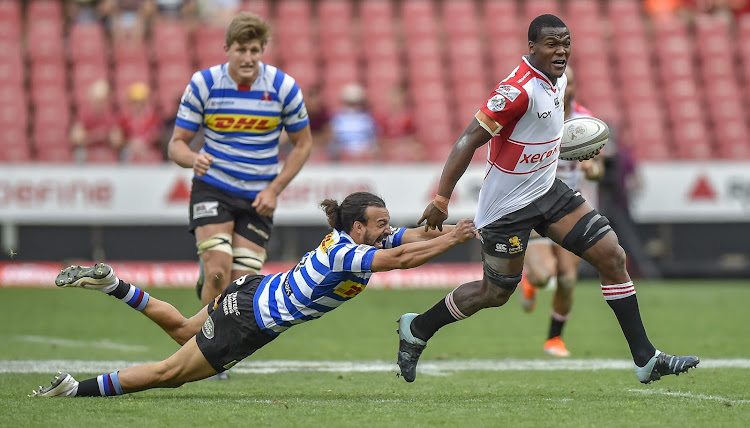 Dillyn Leyds of Western Province misses a tackle on Hacjivah Dayimani of the Xerox Golden Lions during the Currie Cup at Emirates Airline Park in Johannesburg on September 15, 2018.
Image: Christiaan Kotze/BackpagePix

The Golden Lions will on Thursday name their team to play the Sharks in a Currie Cup semi-final in Durban‚ and No8 Hacjivah Dayimani seems to relish the prospect of being demoted to the bench.

Dayimani is likely to make room for Warren Whiteley who needs game time after being sidelined with a groin injury while on duty with the Springboks.

“I actually see it as a big positive‚” said Dayimani.

“I actually enjoy coming off the bench because I think it is much easier.

"You can watch the game from the side and assess what is going on. When you are on the field you just see jerseys.

"From the bench you can see what the loosies are doing. Are the loosies hanging back‚ or are they wide? When I come on I can exploit that.

“I feel the coaches are actually helping me. I’m excited to be on the bench where I make (mental) notes.”

The 21-year-old is like a hyper active sponge‚ trying to absorb as much as he can early in his senior career.

Playing behind Whiteley on Saturday will give him the opportunity to take in more.

"I see it as a big opportunity to learn what he does. I haven’t played that much with him because he was injured‚ but I’ve watched him play.

“I feel I still have a lot to learn from him especially understanding the game better.

"I just go onto the field and play what I see. He does the off the field stuff‚ like studying the players. I’m very excited to learn more from him this weekend.”

Earlier in the campaign the Golden Lions were out muscled in the wet in Durban but Dayimani feels the team has more going for it this time.

“I thought it was a bit of an inexperienced team‚" he said.

"We’ve been together for a while and we’re gelling.”

The Sharks have a brutish pack and they boast personnel particularly in their front and backrows that tend to boss the collisions.

Dayimani‚ who excels in space‚ feels the Golden Lions‚ where possible‚ should avoid the collisions.

“I feel if we try and fight fire with fire it is not going to work‚" he said.

"We should find other ways and stick to what works for us. That worked for us especially in Super Rugby.

After falling short with the Golden Lions at the same stage last year at Newlands‚ Dayimani is beaming at the prospect of playing in another semi.

"It is my second semi-final at Currie Cup level. I see it as a way forward in preparing for Super Rugby next year.

“I’m chuffed the coaches actually backed me. If you asked me two years ago I would have said I see myself playing u21 this year. That was my goal.

“To be in the Currie Cup set-up this year is a big thing for me. I just want to keep knocking on the door to show guys like Duane Vermeulen and Warren Whiteley that I’m ready to step up.”