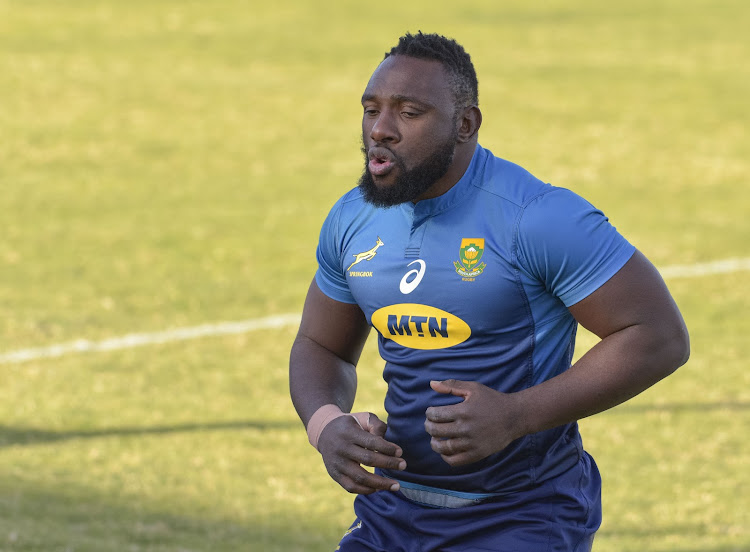 Tendai "Beast" Mtawarira has been ruled out of the Springboks' end of year November Tour to Britain and France.
Image: Gavin Barker/BackpagePix

Tendai "Beast" Mtawarira will miss the Springboks’ November tour to Britain and France‚ robbing the squad of their most experienced player for four tough Tests.

Mtawarira‚ 33‚ sustained a neck injury against the All Blacks in Pretoria earlier this month‚ meaning he won’t add to his 107 caps again this year.

There was a recall for No 8 Duane Vermeulen‚ who missed the Rugby Championship due to Japanese club commitments.

Lock Lood de Jager was also recalled after a lengthy injury lay-off that has kept him out of the entire international season and prop Trevor Nyakane is back as well.

Coach Rassie Erasmus named a preliminary 20-man squad on Sunday‚ which will be fleshed out to about 34 players after next weekend’s Currie Cup final.

Although more names will be added‚ including some of those northern hemisphere-based players‚ Erasmus has stuck largely to the same names that have played this year.

Interestingly lock Franco Mostert was not named on Sunday as he has just joined English club Gloucester‚ whom he has yet to play for. He should be included when Erasmus completes the squad announcement next week.

“It is good to welcome back a player of the caliber of Lood – he will add experience to a position where we already have some very good competition for places‚” Erasmus said.

“Duane‚ of course‚ will also bring similar valuable experience to the group.”

According to Erasmus‚ the Springbok coaching staff are looking forward to start working again with the players following a short break after the Rugby Championship.

“It’s a tough tour and our preparation time is limited‚ but we have set ourselves some goals and as has been the case the entire season‚ we would like to see the squad continue to grow as a group and add to our depth with the 2019 Rugby World Cup less than a year away‚” said Erasmus.

The Springboks open their tour on Saturday 3 November at Twickenham in London when they face England for a fourth time this year.

The Springboks won a three-Test home series against Eddie Jones’ men by 2-1 in June.

A week later‚ captain Siya Kolisi and his Springbok team mates tackle France at the Stade de France in Paris.

On 17 November‚ Scotland host the Springboks at Murrayfield in Edinburgh‚ before the tour concludes with a visit to the Principality Stadium in Cardiff to play Wales on Saturday‚ 24 November.

Neutrals had hoped the addition of Bok stock to the Lions’ ranks would help pull this game deeper into the realm of honest contest.
Sport
3 years ago