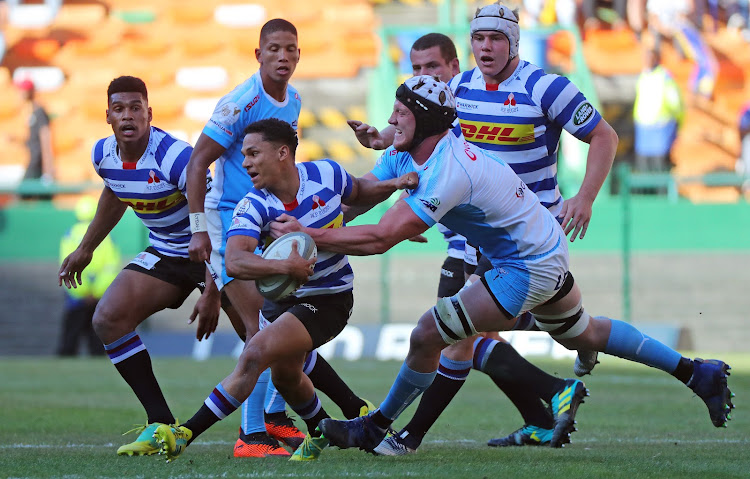 Herschel Jantjies of Western Province is tackled by Hendre Stassen of the Blue Bulls during the Currie Cup semifinal match at Newlands Stadium in Cape Town on October 20, 2018.
Image: Chris Ricco/BackpagePix

A quirk of fate and a clever reading of the competition rules helped Western Province to sneak into the Currie Cup final when they were allowed to bring back scrumhalf Herschel Jantjies for extra time against the Blue Bulls.

Province won the match 35-32 thanks to SP Marais’ eighth penalty of the match in extra time.

They will meet the Sharks at Newlands on Saturday.

The entire competition was played with rolling substitutes and only 22 players until the semi-final.

The rules changed for the semis‚ allowing 23-man squads but no rolling substitutes‚ which added confusion to the closing stages of the thrilling semi-final.

Jantjies‚ who started for Western Province, had been substituted midway through the second half and replacement Paul de Wet then suffered an ankle injury with two minutes to play.

That meant wing Sergeal Petersen had to play scrumhalf and feed the final‚ critical scrum. Petersen made a mess of clearing the ball from the base and the Blue Bulls turned over possession.

A few phases later they scored a try that tied up the match.

“At the start of extra time (tighthead) Wilco Louw was on‚ replacement prop Michael Kumbirai was at flank‚ (flank) Jaco Coetzee was on the wing and Sergeal‚ who is a wing‚ was at scrumhalf‚” coach John Dobson said.

“With that formation we would have been under enormous pressure in extra time. But Wilco took a blow and was bleeding heavily.

“The match officials handled that very well and it just happened to suit us because we were able to send a scrumhalf back on.”

Dobson was relieved to have escaped with a win after a stuttering performance from his team following a season of dominance in the Pool phase. Province’s narrowest winning margin was 22 points over the Sharks prior to the semi-final.

Dobson said in the build-up to the match that he wanted to see his side tested. He got what he wished for‚ and it was a little too close for comfort for the coach.

“That was tough. I have got absolutely no doubt [it will help in the final]‚” Dobson said. “I did say in the week we wanted to be stress-tested but I didn’t mean quite that. Something like 19-12 could have been a nice stress test‚ not extra-time.

“We learned a hell of a lot from today. Maybe from a couple of errors of selection and the kicking game‚ which was poor. I said in the week the Blue Bulls would keep the ball.

“Our plan was to be more direct. We tried to force it. There was a bit of pressure‚ which may have been my fault‚ we wanted to play this kind of rugby and we maybe freestyled a bit too much – in fact I know we did.”

De Wet appears to be the only serious injury concern for next week’s final but on the up side veteran scrumhalf Jano Vermaak should be ready after an injury layoff.