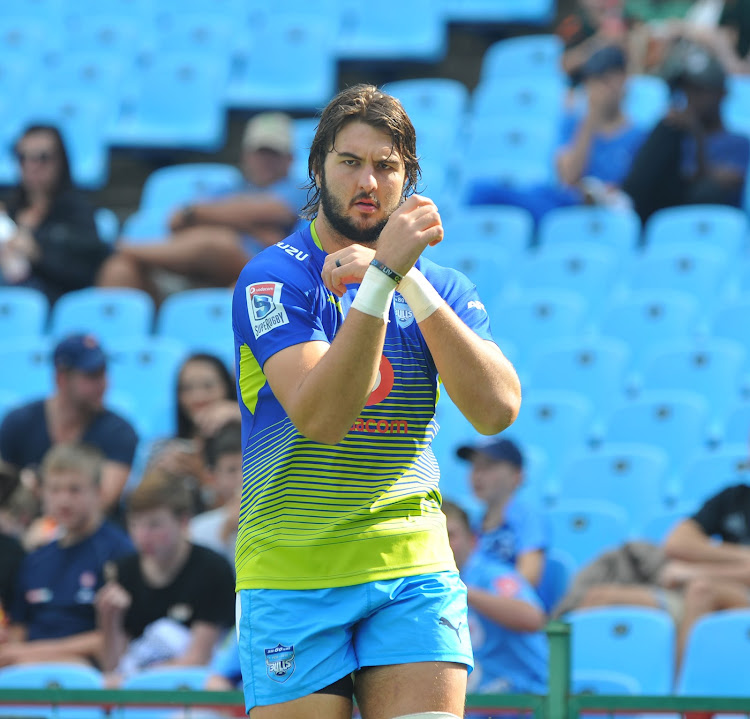 Lood De Jager of the Bulls during a Super Rugby match against the Rebels on April 21, 2018 at Loftus Versfeld Stadium in Pretoria.
Image: Sydney Mahlangu/BackpagePix

Big Lood de Jager is a happy man after a season of disappointment now that he is back in the Springbok camp.

De Jager‚ the 2015 SA Player of the Year‚ had a magnificent start of the season in Super Rugby for the Bulls.

Under new coach John Mitchell‚ the 2.05m giant second rower seemed to have taken his game to another level.

Besides performing his primary functions immaculately‚ De Jager’s ball carrying and general loose play‚ which had always been good‚ was even better in terms of his handling an option taking.

But the injury‚ sustained on May 12 against the Cell C Sharks at Loftus‚ put paid to a large chunk of his season.

De Jager underwent surgery on May 18 and has been on an extensive rehabilitation programme ever since.

As a result he has missed all 10 of the Boks’ Tests this season and has also watched RG Snyman and Franco Mostert become established Test players.

Last Sunday though‚ Bok coach Rassie Erasmus included De Jager in his squad for the November tour of Britain and France despite his lack of game time.

Earlier this season Erasmus did the same with Eben Etzebeth after he had been out of the game for eight months with a shoulder injury.

Etzebeth played as if he had never been away in the Rugby Championship and the same is expected of De Jager.

In scorching Stellenbosch heat‚ he joined Etzebeth‚ Snyman and Pieter-Steph du Toit (lock and flank) at the training camp‚ where the Boks have been sweating it out on the field and in the gym since Monday.

“It’s awesome to be back‚” De Jager said. “Over five months out is a long time but it’s been great to be training with the Boks again‚ even if it has been 37 degrees.

“Of course when we go to Europe it won’t be like this and overheating certainly won’t be a problem. But the guys are so pumped up at the moment that we would train in a 100 degrees if we had to.

“I must say it was a very weird feeling sitting at home watching the guys play in the June series and in the Rugby Championship.

“It was great to see the guys displaying so much courage to fight back every time to eventually win those two Tests and clinching that series against England.

“Then‚ in the Rugby Championship‚ you could see Rassie was trying a few combinations but once the guys managed to hit their stride‚ it was just fantastic to watch them in those two matches against the All Blacks and that win over the Wallabies.”

In terms of the competition for his place‚ De Jager looked at it as a positive challenge.

“I reckon it’s great for us as locks and obviously the Springboks that we have such quality second rowers in the squad‚” said De Jager.

“The competition between us is fantastic and that’s what you want as a player‚ it is something that spurs you on so that you always give it your best.”

Centre Lukhanyo Am appears to be out of the Springboks’ November tour to Britain and France after a slower than expected recovery from a fractured ...
Sport
3 years ago