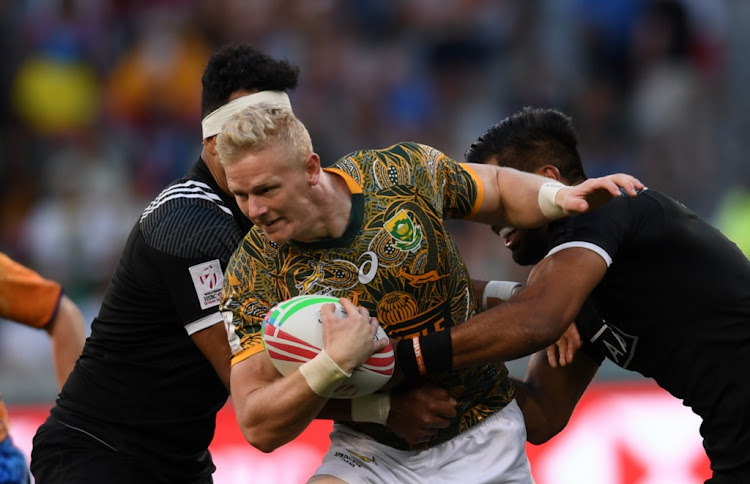 Despite finishing third at their home tournament in Cape Town‚ the second stop on the 2018/19 HSBC World Series‚ there was an air of satisfaction about the Blitzbok camp.

The Blitzboks lost 17-12 to Fiji in the semi-finals but rallied to beat New Zealand 10-5 in the bronze medal match to close some ground on the overall standings.

It was an improvement on the previous week’s sixth place in Dubai but SA still lost two matches – Fiji in the semi and their final Pool match against New Zealand.

Fiji went on to win the Cape Town leg with a 29-16 victory over the USA in the final‚ but the Americans head the overall World Series standings after making the final in both Dubai and Cape Town.

SA are nine points off log leaders the USA after two rounds and fifth overall with 29 points. In a year when the top four teams on the standings earn automatic qualification for the Tokyo 2020 Olympics‚ it is a worrying start for the Blitzboks.

The Blitzboks’ weak start to the 2018/19 HSBC World Sevens Series continued with semifinal elimination at the Cape Town leg on Sunday.
Sport
3 years ago

“We finished sixth in Dubai where we played poorly in our first four matches‚” Powell said. “We started picking up some momentum and I think we improved further this weekend [in Cape Town].

“We let ourselves down at times‚ but we certainly finished in a much better state than last weekend.

"This is a good‚ positive way to finish the second leg of the series‚ with some momentum to take into the next leg in Hamilton in late January.”

The Blitzboks played their final match with only 10 fit players after Snyman‚ Muller du Plessis (lower back) and Zain Davids (hamstring) were ruled out.

“We started that match with only 10 players and played until the very last second of the match‚ something I am very proud of‚” said Snyman. “Having conceded late tries against them (NZ) on day one and against Fiji earlier on Sunday in the Cup semi-final‚ the guys proved their determination not to do so again.”

Blitzbok winger Siviwe Soyizwapi agreed with Powell and said it was a “much better feeling” than last weekend.

“We were competitive all along and had we play one of two moments better‚ we could have been smiling now‚” said Soyizwapi. “Six guys played here in Cape Town for the first time and they would have benefitted from this as well. As usual the crowd came out in massive numbers and it was an honour to play here.”

The World Series goes into a short break and resumes in Hamilton in late January.