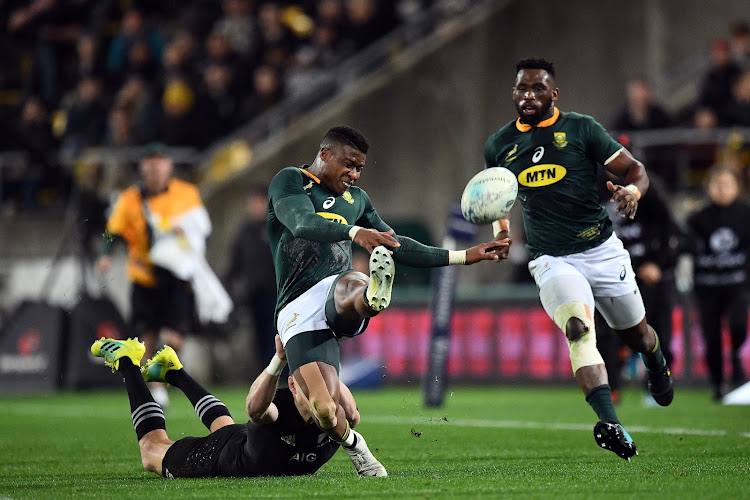 South Africa's Aphiwe Dyantyi kicks the ball away to avoid the tackle from All Blacks' Beauden Barrett during the Investec Rugby Championship between All Blacks vs the Springboks at Westpac Stadium in Wellington on Saturday September 15 2018.
Image: Raghavan Venugopal / © www.Photosport.nz 2018

Springboks and Lions winger Aphiwe Dyantyi was outstanding this year after delivering breathtaking  performances for club and country.

He impressing with scintillating tries and mesmerised opponents with his explosive speed and devilish step-overs.

1) Breakthrough player of the year award

He captured the imagination of rugby fans around the world when he walked away with 2018 World Rugby Breakthrough Player of the Year award, taking home an accolade that capped a sensational year.

Dyantyi started in 13 of SA’s 14 Tests this year where he scored six tries, including braces against Argentina and in the memorable win over world champions New Zealand in Wellington.

2) Brace of tries in Wellington

The Springboks arrived in Wellington as overwhelming underdogs but turned the tables to narrowly beat New Zealand for the first time in nine years with Aphiwe Dyantyi scoring a brace of tries in an epic Rugby Championship encounter.

Other tries of the famous victory were scored by Willie le Roux‚ Malcolm Marx and Cheslin Kolbe.

Dyantyi scored beautiful tries throughout the Super Rugby campaign, where the Lions lost in the final to the Crusaders, but the one he produce in the 44-26 win over the Waratahs at Ellis Park in July was easily the pick of the lot.

The 24-year old star recaptured his up and under on the other side of the field before he avoided tackles from Curtis Rona and Bernard Foley to touch down in style.

Dyantyi’s Rugby Championship got off to a good start as, together with Makazole Mapimpi, they bagged a brace of tries when South Africa beat Argentina at Kings Park.

One of his tries was a thing of beauty as he sped to touch down on the left corner after he was released by a pin-point cross-kick from Willie le Roux.

5) Nomination for the SA Rugby player of the year

To cement the rapid strides he made over the past season, Aphiwe Dyantyi was recently nominated for the prestigious SA Rugby Player of the Year Award for 2018.