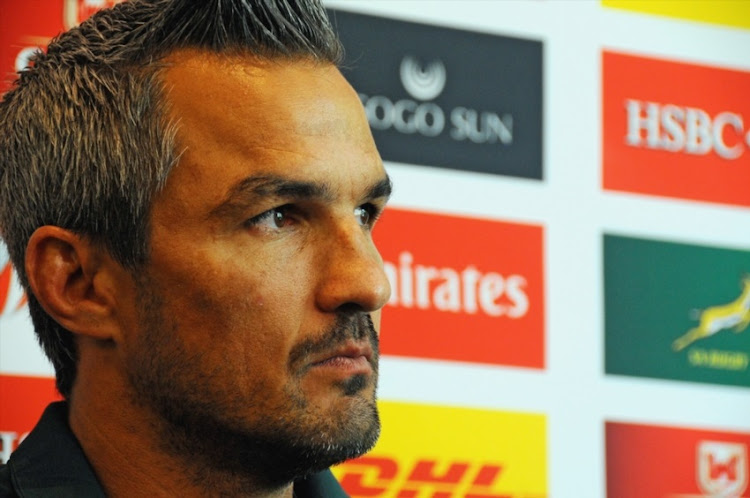 It's taken Blitzbok coach Neil Powell some time to realise that he is not just going through a new chapter with the team‚ but writing a new book in the absence of so many stalwarts.

Powell’s team‚ the reigning HSBC World Sevens Series champions‚ leave for New Zealand on Saturday for the third and fourth legs of the series in Hamilton and Sydney‚ which will go a long way to determining whether South African can defend its title.

The Blitzboks currently lie fifth on the standings after the first two rounds in Dubai and Cape Town – a lowly position they have not been in for over five years.

With eight rounds of the season to go and just eight points separating the Blitzboks from log leaders the USA‚ there is very little in it among the top teams.

But South Africa’s slow start to the campaign‚ which saw them miss the Dubai semi-finals and finish third in Cape Town‚ is largely down to building a new squad after the departure through injury and fifteens commitments by a core group of players.

It’s a full team of players with World Series-winning experience that Powell is missing.

Despite knowing that this would be a season of challenges and change‚ Powell admits that he wasn’t completely ready for the impact these absences have had.

“We would love to have had a better start to the season‚” Powell said.

“And I’ve realised it now but perhaps we all have been in a bit of denial about the fact that we’re in a massive transitional phase.

“We knew some guys had left but we felt that we had enough depth in our system to keep up the performances and standards. That’s obviously not the case and it is going to take a little more time because there are new combinations and one or two players making mistakes because of their inexperience.

“It’s not a new chapter in our book‚ it’s a brand new book we’re writing now. Going into Hamilton‚ we’re looking for another step up in the way we improved between Dubai and Cape Town.”

The objective is simple in theory for the Blitzboks on this leg – they have to make the semi-finals in both Hamilton and Sydney to maintain a realistic chance of staying in the title race.

The experienced Chris Dry will return to the squad for the first time in more than a year after being named in the tour group for New Zealand and Australia.

Dry last played for the defending World Series champions in Cape Town in December 2017. His return to the side for his 65th tournament is just reward for the months of rehabilitation since he was ruled out with a knee injury 14 months ago. He takes over from Ryan Oosthuizen in the forwards.

There are two changes amongst the backs to the side that finished third in Cape Town last December.

Stedman Gans‚ who last played in London in June last year‚ will replace injured Muller du Plessis and Selvyn Davids‚ the 13th player in Cape Town‚ comes into the match day squad for Specman‚ who has joined the Bulls.

Philip Snyman will again lead the side after missing the second day of action in Cape Town with a shoulder niggle‚ while Justin Geduld and Werner Kok‚ who underwent minor surgery for knee and facial injuries last month‚ have also being declared fit to play in Australasia.

Mfundo Ndhlovu and Afrika were not considered due to injury.

The inclusion of Kyle Brown‚ for his 68th World Series tournament‚ will see the former team captain equal the record for tournament appearances in the Blitzboks jersey‚ held by Frankie Horne.

The Springbok Sevens squad for the HSBC New Zealand Sevens: