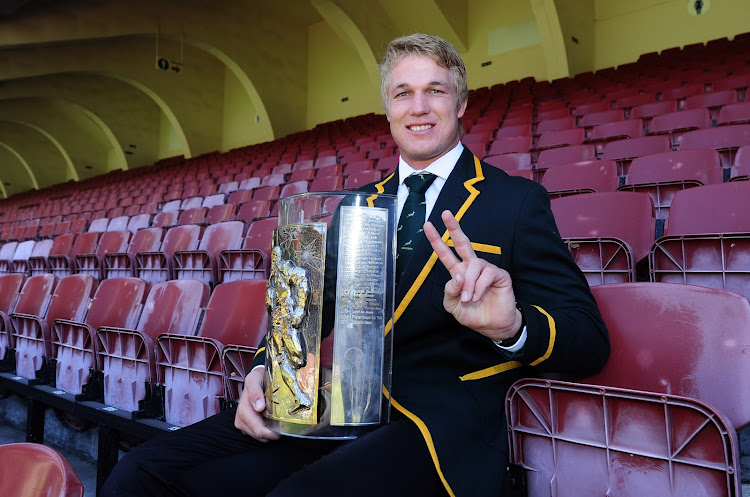 Pieter-Steph du Toit admitted that he was ‘sore’ and that he was ‘out of shape’ by the time the 2018 season ended‚ but his indefatigable efforts were rewarded with a second SA Player of Year award in three seasons.

The athletic 2m tall lock/flank was the most consistent performer for the Springboks last season and his win‚ where he beat out 2017 winner Malcolm Marx‚ as well as wing Aphiwe Dyantyi‚ flyhalf Handré Pollard and lock Franco Mostert‚ was well deserved.

When he won the award for the first time in 2016‚ Du Toit played almost exclusively as a lock. In 2018‚ he played the bulk of his Test rugby at blindside flank.

“It’s a more satisfying feeling this time around because in 2016 I came off the bench a lot‚” Du Toit said.

“Last season I started most of the games and I felt I was able to play to my full potential‚ although my body felt really sore at the end of season.

“By the end of the year I had lost some weight because I had played so much rugby. I must say I didn’t look in good shape because I lost a lot of muscle as well.

“Going into this year I’m feeling good because I have done some ‘smart’ gym and fitness and my weight is back where it was. I’ve been well managed in the pre-season.

“I wouldn’t say I’m a better athlete now‚ but I’m more experienced and smarter after several years at the top.

“It’s a great feeling to sort of‚ have won the award in two different positions. Beating New Zealand was a highlight last year but on a personal note the biggest honour was getting into the team every week and becoming comfortable playing at No 7.”

Despite his success and near complete switch to flank‚ Du Toit will challenge himself to be even better in 2019 – especially with the World Cup in Japan looming.

“You cannot stand still‚ you have to keep improving otherwise the competitors for you place will pass you‚” Du Toit said.

“I’ve got my own personal goals I’ve set and aspects of the game I’m working on. Hopefully this year I will get a lot more game time at No 7.”

Du Toit also had the honour of becoming Springbok captain No 60 when he led the team against Wales in Washington last year.