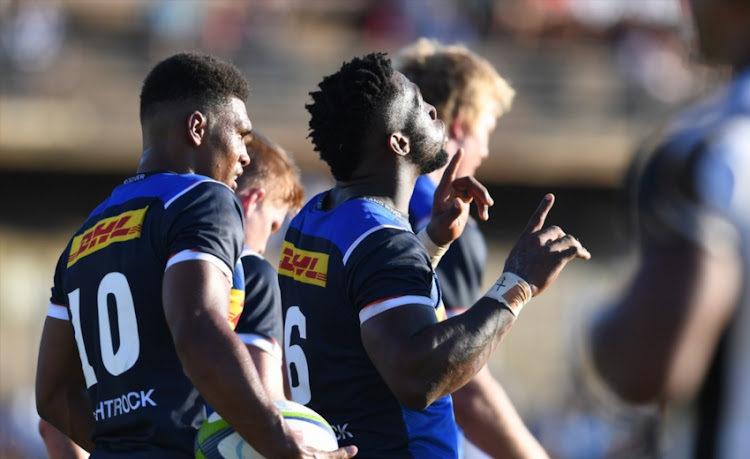 Siya Kolisi (captain) of the Stormers celebrates after scoring a try during the Super Rugby, Warm Up match between Boland and DHL Stormers at Boland Stadium on February 08, 2019 in Wellington, South Africa.
Image: Ashley Vlotman/Gallo Images

The Stormers completed their preseason matches with an 87-5 rout of the Boland Cavaliers in a steamy Wellington on Friday.

Stormers coach Robbie Fleck gave his battalion of Springboks crucial game time and barring a slight scare for prop Steven Kitshoff‚ they all came through the test.

Kitshoff picked up a hamstring niggle‚ although the full extent of the injury will only be ascertained next week.

As expected the Stormers pack had too much power and class for the Cavaliers and from the platform that the eight laid‚ their backline ran riot.

Centres Damian de Allende and Ruhan Nel gave good performances and suggested that they would be in the midfield for next week’s Super Rugby opener against the Bulls at Loftus.

The Stormers led 49-0 at halftime with captain Siya Kolisi dusting off the rust to score one of the team’s 13 tries.

As preparation for Super Rugby the Stormers gained little from the exercise but it was an important run for the likes of Kolisi who had not previously played at all in the other two warm-up matches.

The Stormers have shown decent form in the preseason particularly with their 33-28 win over the Bulls in front of nearly 50‚000 fans at the Cape Town Stadium last Sunday.

With the exception of lock Eben Etzebeth‚ and perhaps Kitshoff‚ they should also have a fully fit squad to choose from for next weekend’s first-round clash against the Bulls at Loftus.

Off-field issues also seem to be under control after the WP Rugby board and the exco of the WP Rugby Football Union (WPRFU) set aside their differences at a meeting in Cape Town.

For now all is well‚ but the peace and goodwill remain tenuous.