Blitzboks have to fight to stay in the hunt 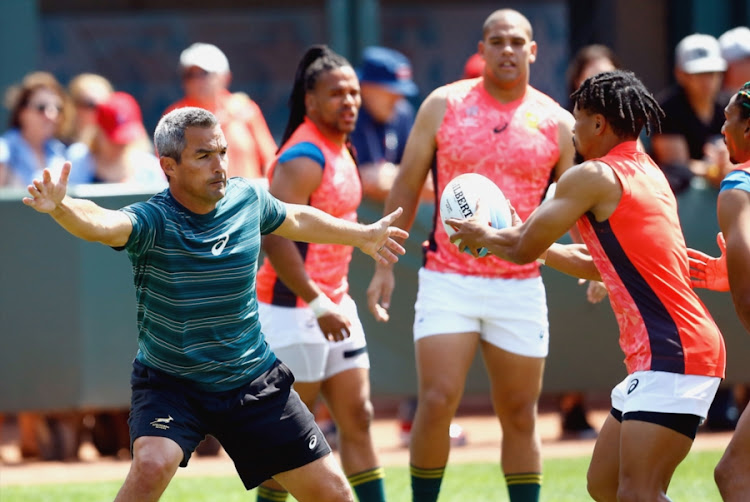 With their grip on the HSBC World Sevens Series title looser than it has been in two seasons‚ the Blitzboks are on a mission to stay in the fight over the next fortnight.

The fifth and sixth legs of the 10-tournament series take place in Las Vegas and Vancouver in the coming two weeks and SA’s more realistic prospect would be to entrench themselves in the top four.

With 19 points separating SA from joint log leaders New Zealand and the USA‚ earning one of the four automatic Olympic qualifying berths when the series is over‚ has to be the main priority now. SA are on 57 log points and England in fifth have 55.

Despite a 40-hour journey to reach Nevada for the tournament that marks the halfway point in the season‚ Las Vegas has been a happy venue for the Blitzboks.

“Las Vegas has been good to us in the past‚ and we have developed a liking for the Sam Boyd Stadium‚” captain Philip Snyman said of the venue where the team has won four times in the last eight years.

“We have a couple of new faces in the team‚ so we need to adapt to that. They bring different strengths to the system‚ and we need to tap into that.”

The trip is the longest of the ten stops for the Stellenbosch-based side on the HSBC World Rugby Sevens Series‚ and for the only debutant on tour‚ Makata‚ it is one filled with anticipation.

The 20 year-old had his first training session with the team upon arrival‚ and was handed his Blitzboks training jersey in a traditional hand-over ceremony for newcomers.

For Makata‚ waiting for this opportunity has been well worth it‚ he said with a smile. “I have worked hard to get to this point‚” Makata said.

“Playing in the SA Rugby Academy team in tournaments in Dubai and South America made me realise that I want this very badly. Now I am here and I need to make the best of this wonderful opportunity.”

The former Sterling High School pupil is keen to get going come Saturday‚ when the Blitzboks take on Japan‚ Chile and England in their pool. “I have a role in the team and I know what is expected of me‚” Makata said.

“The reward for me will be to justify the confidence the coach has shown in me by contributing to the team effort.”