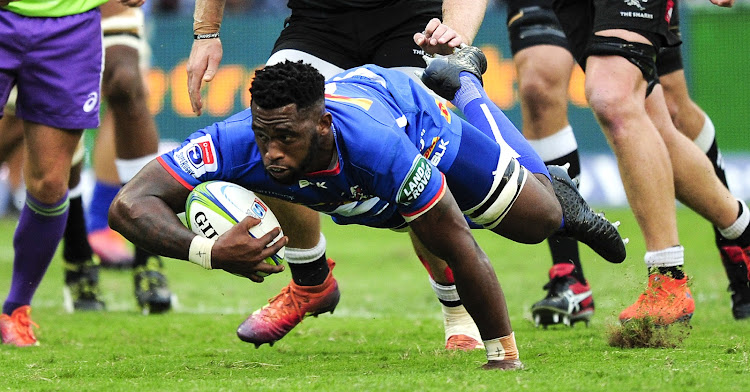 Siya Kolisi, Captain of the Stormers reaches for the line during the 2019 Super Rugby game between the Sharks and the Stormers at Kings Park Stadium in Durban on 2 March 2019.
Image: © Gerhard Duraan/BackpagePix

The Stormers somehow found a way to collect a second consecutive Super Rugby win when they edged the Sharks 16-11 in an unedifying clash at Kings Park.

At best, this game, like most South African derbies, was about the result and less about how the four points was accrued.

However, it's the kind of rugby match that convinces fans to stay away from stadiums and save their hard-earned rands for something more worthwhile.

The Stormers showed incremental signs of improvement but they aided and abetted this unsightly spectacle.

The Sharks were equally terrible in gifting the Stormers their first away win in more than two years.

The Sharks gifted the Stormers an easy try when Andre Esterhuizen's errant pass was swallowed by Damian Willemse, who sauntered in for an easy fifth-minute intercept try.

That was the only highlight of what was soulless first half that not only lacked remarkable plays, but contained two yellow cards.

Lukhanyo Am (21) and Akker van der Merwe (38) where the players who spent time in the naughty corner for offside and ruck infringements.

The Bulls applied equal amounts of brawn and brain as they vanquished the Lions on home soil on Saturday.
Sport
2 years ago

The Sharks weren't punished by a Stormers side that's still trying to find its feet three games into the season.

Instead, the Sharks enjoyed a surfeit of possession and territory but like in last week's win against the Blues, they over-elaborated when percentage rugby would have done the trick.

It was a South African derby after all and entertainment is never high on the rugby menu and the wet conditions at King's Park didn't help.

The first half was error-strewn in its entirety and it didn't help that Jaco Peyper had to be on the pedantic side with law application after the refereeing horror show during the Stormers/Lions fixture at Newlands last week.

The strict applications of the law were indeed welcome, especially at scrum-time where both sides struggled to gain the ascendancy.

The Stormers though showed better enterprise on attack as compared to their sterile showings against the Bulls and the Lions.

The Sharks though were precise on defence but Siya Kolisi should have scored in the 20minute but unfortunately lost control of the ball with the try-line in sight.

The Sharks though started the second half like a house on fire when Am scored in the 42minute while the hosts were down to 14 men.

It then was the Stormers' turn to lose their discipline when outside centre Dan du Plessis was yellow-carded for a high tackle on Makazole Mapimpi in the 47minute.

Marais and Du Preez traded penalties but such was the turgid nature of the game, allied with poor handling that was exacerbated by the soapy ball.

The Stormers finished the stronger of the two sides and managed the game better to secure a second consecutive win.

At no point though do they look like a team that can threaten some of the better sides in the tournament.