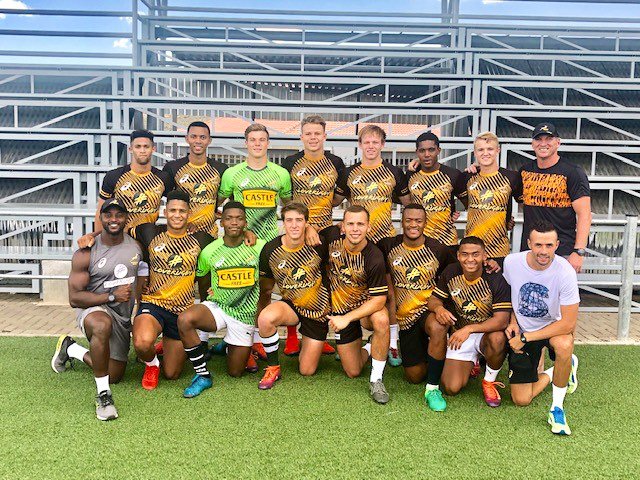 The Blitzboks team pose for a photo.
Image: Springboks Sevens/Twitter

Defence and ball possession have been issues for the Blitzboks during the 2018/19 HSBC World Sevens Series campaign and it’s something they will need to improve in round six in Vancouver.

So far this season‚ in 29 matches‚ the Blitzboks have only won 17 because they miss on average six tackles per game.

In sevens rugby‚ with more room and fewer players‚ missed tackles are amplified.

It’s no surprise them that the Blitzboks have lost 11 of 29 matches they’ve played this season.

On average since the World Series began in 1999‚ they lose 11 matches per season. The current campaign is only halfway through.

The fact that the Blitzboks suffered back-to-back defeats in four of the five tournaments played in the series so far‚ rubs even more salt into the wounds for the South Africans.

Springbok coach Rassie Erasmus said he would pick a full strength team for the Rugby Championships and admitted he was ‘70-80%’ sure of what his ...
Sport
2 years ago

“It hurts the team as well‚” said Blitzbok back Stedman Gans‚ and they are working very hard to fix the wrongs.

“We realise that things are not going as smoothly as it should and there is a real desire in the squad to solve that‚” he said as the squad prepared for the HSBC Canada Sevens‚ to be played at BC Place in Vancouver this weekend.

“There are two things we can always fall back on‚ I believe and that is our effort and our processes. We have faith in both. The guys will always go out and give their best effort out there for the jersey and for each other‚ of that there is no doubt.

“Our processes have been successful in the past and it will bring success in the future. We just need to implement it better.”

The Blitzboks finished joint-seventh in Las Vegas last week‚ the worst since Gans joined the team 63 matches and 18 tries ago‚ but for the two time World Series winner there is a real belief that the upward curve in performances has started.

Springbok coach Rassie Erasmus admitted to falling short of his 45% transformation target in 2018‚ but even so‚ was not daunted about reaching the ...
Sport
2 years ago

Gans lamented the lack of execution: “Against the USA for example‚ we lost possession eight times. You cannot afford that and it was reflected in the results‚ but we are getting better all the time. We are not the same team as last year at the same time.

"We lack some experience and mistakes will be made‚ but we need time to grow and if we are afforded that‚ the results will be very good.

“All of us are keen to fulfil his role on the field. We are building something special here and we all want to be part of it. The effort is there‚ the implementation is getting there‚ but unfortunately‚ these things take time.”

● Both replacement players‚ Zain Davids and Kurt-Lee Arendse‚ have since joined the team and will train with the squad on Thursday.