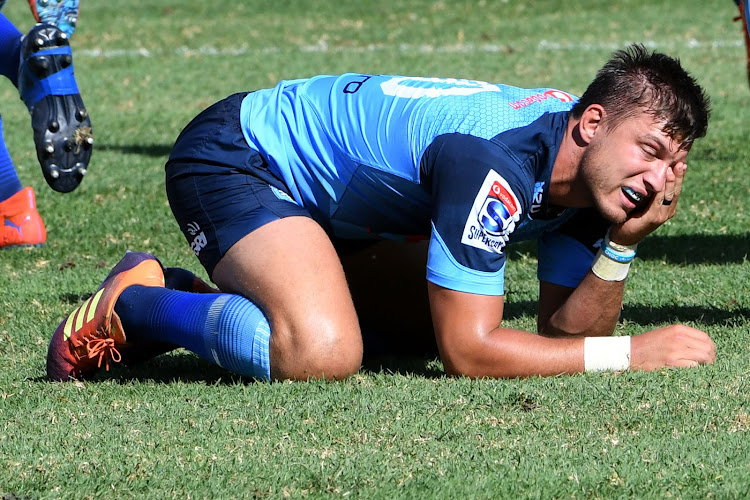 Handre Pollard of the Vodacom Bulls reacts in despair during the Super Rugby match the Chiefs at Loftus Versfeld on March 23 2019.
Image: Lee Warren

As he surveyed the wreckage of their unexpected and heavy 56-20 defeat to the Chiefs at Loftus on Saturday‚ Bulls coach Pote Human admitted that the result was embarrassing.

The Bulls hosted the New Zealanders on the back of two good wins over the Lions and Sharks but they disintegrated against the Chiefs side who went into the game under pressure and lying at the bottom of the overall Super Rugby standings.

The Bulls‚ who have dropped to fourth on the SA conference‚ were outscored seven to two tries and they were outplayed and outmuscled in every department by the Chiefs who registered their first win of the campaign after six matches.

“We didn’t pitch up at all‚ I think we were still on a bye.

"I gave the guys sometime off last week because we had a bye and I think they were still off‚” said a clearly disappointed Human about one of their heaviest defeats at Loftus.

Official: Sunwolves out in the cold after Super Rugby axing

“This is humiliation for us but we have to dig deep and come back stronger against the Sharks next week. From the kickoff we struggled‚ we were flat and we didn’t have the energy.

"The Chiefs were good but we were just off and poor. We allowed them to play‚ we threw the ball away too many times and it was just not our day.”

With a tough trip to Durban next week‚ Human said he hoped that their poor performance was just a blip as they must keep up with the Lions‚ Sharks and Stormers who occupies the top three positions on the SA conference respectively.

“I hope this was just a blip because we are much better than this and we showed it in the three of the first four games‚" he said.

"This is a bad result for us but we must take it on the chin and come back stronger next week.

"We expected them to come with energy and a high level of intensity and we prepared for that‚ but unfortunately we did not pitch at all and this must serve as wake-up call.”

The Lions heaped more misery on the Sunwolves with a comfortable 37-24 victory at Singapore’s National Stadium on Saturday, a day after it was ...
Sport
3 years ago

“The tournament is not won in March.

"There is still a lot of rugby to be played before the play-offs but if we play like this we will never get anywhere close to that.

"Every player and management member will have to look at themselves and come back with a much better effort next week.

"I have asked the players to look in the mirror and ask themselves if this is the best they can do.

"We know that we are much better that this.

"If we want to play for the play-offs we must bounce back big next week.”