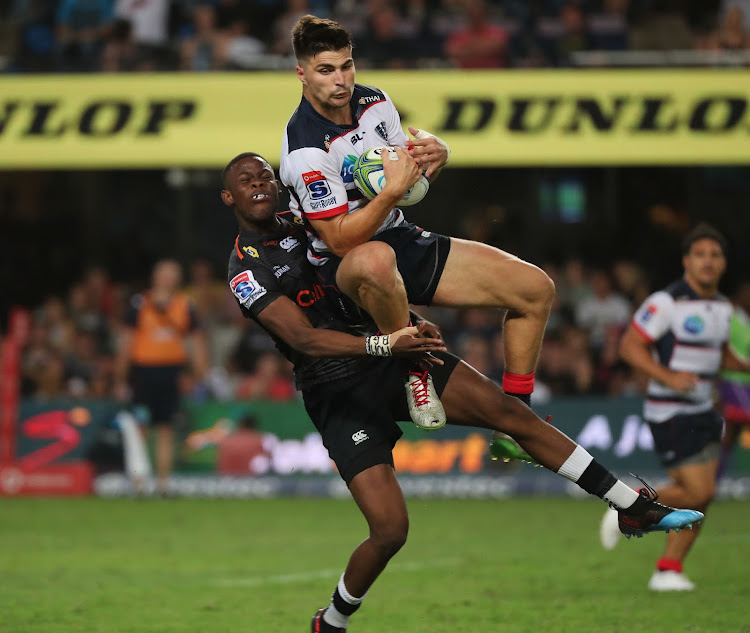 Up and coming Sharks fullback Aphelele Fassi didn't get the chance to show his wares against the Bulls earlier this month.

In light of what transpired in that hammering‚ it may have been a good thing for him.

Little of the blame could be proportioned to the back three that played that afternoon. They can only function best when the pack achieves parity or dominance.

Neither was available for the Sharks on March 9 during the course of the 37-14 defeat at Loftus Versfeld‚ a game Fassi missed through injury.

He was replaced by the able Rhyno Smith‚ who was overwhelmed by the Bulls' precise kicking game.

It reminded Fassi of the need to gain physical dominance‚ something the Sharks partially achieved in the 28-14 win against the Melbourne Rebels last week.

The Bulls though will again provide a tough test at Kings Park on Saturday after being punished by a merciless and unusually accurate Chiefs unit at home.

Southern Kings on a tightrope with PRO 14

The Southern Kings will look to drastically improve performances next season to ensure their PRO 14 survival by signing a few high profile players ...
Sport
2 years ago

It was a painful lesson for Pote Human's side and the Sharks will do well to avoid being hapless matadors; a role they reprised with macabre efficiency three weeks ago.

“We didn't generate momentum at critical times in the game and we didn't capitalise on our opportunities. If we could fix that for this weekend‚ that would be a very good thing for us‚” Fassi said.

“South African derbies tend to be more physical than the New Zealand and the Australian matches. They're bitter rivals if I can put it that way and SA derbies are far more physical.”

The back three spots at the Sharks are probably the most hotly contested positions in SA's Super Rugby franchises.

On a given weekend‚ the Sharks can field a world-class back three without having to bat an eyelid.

That partly explains why Fassi is such a talented player and also why he's needed to be at the top of his game each week.

After all‚ he's relegated Curwin Bosch to the bench while the like of Lwazi Mvovo and Leolin Zas are struggling to break through into the match-day 23 on weekends.

New director of rugby at the Southern Kings, Robbi Kempson, had better hit the deck running.
Sport
2 years ago

Bosch may be slightly older than Fassi but the former has been in the system longer than the latter.

The 21-year-old Fassi said he's learnt a lot from Bosch and the Bok-laden Sharks back three.

“As the back three‚ we intend on learning from each other and we communicate because that's how we see the space.

"We always intend on learning a lot from each other and the guys have very good skill-sets.”