Will it be fifth time lucky for the Blitzboks in Hong Kong? 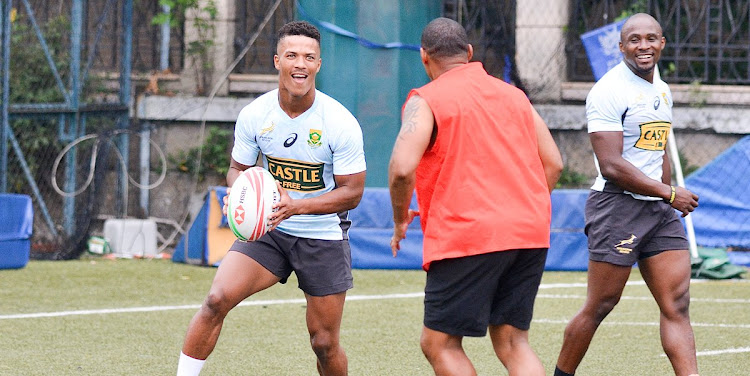 South Africa are virtually out of the running to defend their HSBC World Sevens Series title‚ but they can achieve a first if they win in Hong Kong this weekend.

The undoubted pinnacle of the World Series ‚ the Hong Kong Sevens‚ is one tournament that has teased SA but always broken its heart.

Before the team were known as the Blitzboks‚ SA were runners-up in Hong Kong in 1997 with a team that contained luminaries such as Joost van der Westhuizen‚ Breyton Paulse‚ Pieter Rossouw‚ Andre Snyman‚ Bob Skinstad and Andre Venter.

That tournament was the second staging of the Sevens World Cup‚ Fiji beat SA 24-21 in the final.

It took eight years for the Blitzboks to make the final in Hong Kong again‚ but once more it was Fiji who denied SA glory‚ winning 22-0.

Will it be fifth time lucky?

Veteran Branco du Preez‚ who plays his 68th tournament for the Blitzboks‚ wouldn’t go as far as predicting victory‚ but remained optimistic.

“Every time you come to Hong Kong‚ and I have been here a couple of times before‚ you get that feeling that something is about to happen‚” said Du Preez‚ who has played in 339 matches in his World Series career.

“Each time you step onto the field for the team‚ representing your country‚ makes it very special and the crowd makes it even more so.”

Du Preez has scored 1220 points‚ at an average of 3.6 per match‚ which shows his value to the team‚ with his 387 conversions the Blitzboks’ benchmark.

“My main aim is to make sure I do my job‚ whether it is starting the match or coming off the bench. All of us have different responsibilities‚ but whatever is expected‚ I will be giving it at the very best of my abilities‚” Du Preez added.

For Sako Makata‚ playing only his fourth tournament for the Blitzboks‚ playing in Hong Kong is the fulfilment of a dream.

In the end, history will say the Bulls earned Super Rugby double against the Sharks with a 19-16 win at Kings Park.
Sport
2 years ago

Makata‚ who is yet to score a try for the team‚ said coming to Hong Kong is hugely inspiring.

He was due to play in the Far Eastern city last year as part of a youthful Blitzboks squad‚ but injury ruled him out of contention.

The news about the younger squad travelling to Hong Kong while the senior squad prepared for the Commonwealth Games was communicated way ahead of the actual event‚ and that was something driving the SA Rugby Sevens Academy guys a year ago.

But‚ says Makata‚ the injury that kept him out of the trip last year was a blessing in disguise.

"To be honest‚ I am in a much better space this year than in 2018 and in a way‚ happy that I could not make the trip then‚” said Makata.

“This time around‚ my body is stronger‚ I had a solid run in the last couple of weeks and I am feeling confident in my abilities. That would not necessarily have been the case a year ago‚ to be honest.

“Also‚ the vast amount of experience in this squad provides a much better platform for me to tap into their knowledge‚” added Makata.

He is still inexperienced at this level‚ but for the former Border Craven Week winger‚ the exposure of playing in Las Vegas and Vancouver was immense.

“The first two tournaments were good for me. I learned a lot. This time‚ here in Hong Kong‚ I would like to play more. I am ready for that‚” said Makata.

The Blitzboks face Japan‚ Samoa and Scotland in Pool A of the tournament.