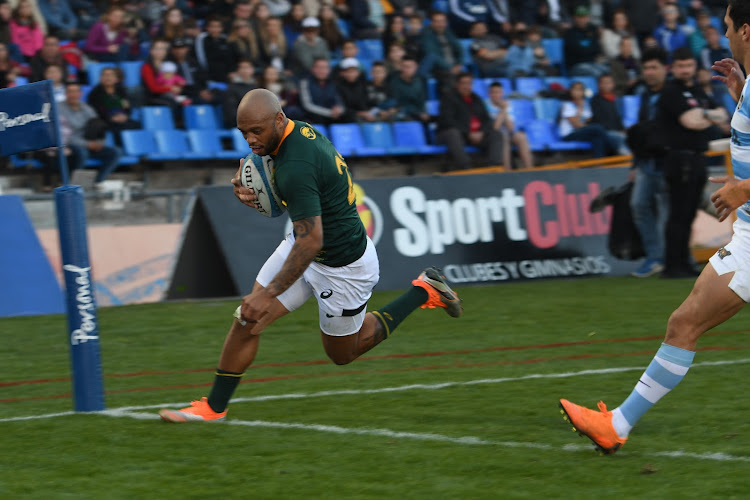 It is building to a crescendo but first he has to strap in for the Sharks in his 99th Super Rugby match at Ellis Park on Friday night.

The Lions’ part workhorse‚ part show pony‚ is laid-back about the landmark and claims he hasn’t given it much thought.

“There were injuries too but that happens in the game and you get through it. I don’t think about it too much. I’m just worried about playing good rugby.”

His can’t-be-bothered disposition can perhaps be attributed to the highs and lows he has had to process in equal measure.

SA Rugby is back in black after showing a modest R2.3m profit for the 2018 financial year‚ according to an annual report released on Wednesday.
Sport
2 years ago

The 30-year-old‚ who also had stints and the Bulls and the Cheetahs‚ has learned to roll with the punches. He generally plays with a smile on his face and even has an outrageous hand-on-the-head celebration before he touches down for a try.

His longevity at Super Rugby level is partly owed to the fact that he is able to cover different positions‚ mostly between jerseys numbered between 11 and 14.

For the Sharks’ clash he is on the move again. He mostly plays at outside centre but he shifts to the inside‚ allowing Aphiwe Dyantyi to slot into the number 13 jersey.

Mapoe doesn’t seem bothered by a move closer to the heavier traffic.

“I just love to play rugby. Just give me the ball and I’ll run. It’s going to be interesting and exciting‚” he said.

Sharks hooker Chiliboy Ralepelle faces a fight to save his career after his “B-Sample” tested positive for the banned substance Zeranol.
Sport
2 years ago

He is equally unfazed about striking a new midfeld partnership against the well-established and hard-running Andre Esterhuizen and Lukhanyo Am.

“I see it more of an opportunity‚ than a risk‚” said Mapoe shrugging his shoulders.

“We love opportunities. It will be a challenge. We love challenges. We have a lot of natural footballers in our backline so it is easy for us to adapt.

“We had a good week so far training wise. I’m really confident going into this weekend.”

Mapoe‚ who made a late start to the season‚ hit the deck running once he got into the action. He came off the bench and helped the Lions dig themselves out of a gigantic hole against the Rebels.

The try he scored after chasing down a kick ahead of the lackadaisical Quade Cooper exemplified the team’s never-say-die spirit that day.

Sharks coach Robert du Preez has opted to stick with his namesake son at flyhalf while Curwin Bosch and Aphelele Fassi swap places at fullback for ...
Sport
2 years ago

He has continued to impress and potentially play himself into wider recognition.

Mapoe‚ who made his Test debut in a losing cause against the All Blacks in 2015‚ last played for the Springboks in a defeat to Argentina in Mendoza last year.

All he is concerned about‚ however‚ is assisting the Lions’ cause.

“This is an important year for us‚” he noted. “We’ve had a good couple of years and we want to build on that.

“It is about serving the team and not myself. I have to better myself to serve the team and that is what I’m focusing on.”