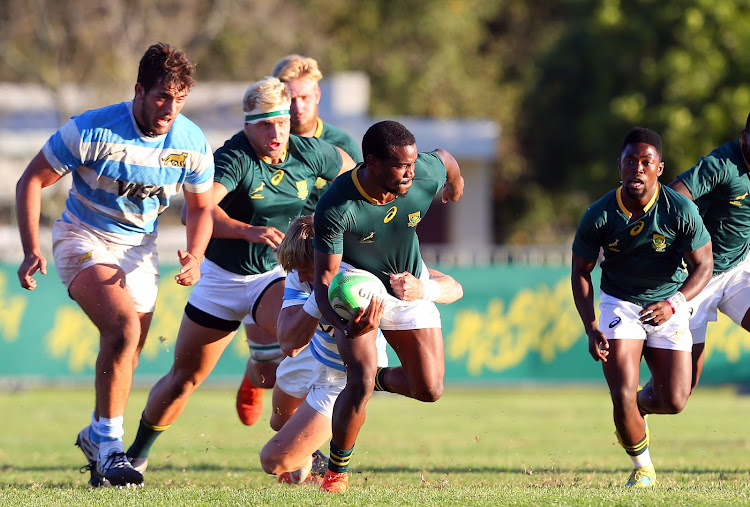 Caleb Dingaan of Junior Springboks during the Under 20 International Series match between South Africa and Argentina at Paul Roos Gymnasium on April 17, 2019 in Stellenbosch, South Africa.
Image: Carl Fourie/Gallo Images

The Junior Springboks face the daunting reality that they are well off the pace just a month before the Under-20 World Championships in Argentina.

At the weekend‚ SA’s finest Under-20s were thrashed 35-8 by England in Coventry. It was an England side missing 10 regulars from the squad that did Under-20 Six Nations duty.

Coming off a narrow one point home loss against Argentina in their previous warm-up match‚ the Junior Boks can be in little doubt where they stand in the pre-tournament pecking order. And it isn’t very high up.

“There are a few aspects of our game that still require a lot of attention‚ and this includes our set pieces and attack‚” Koen‚ who is the team’s assistant coach‚ said.

“There is a lot of detail missing in terms of our attack and we are one-dimensional at the moment. We are lacking creativity and we are not playing with enough variation‚ so there is a mountain of work ahead in the next four to five weeks.

“The aspects we need to improve on are areas that we have been working on‚ but we are still not at the standard we need to be. “We are certainly aware after this match that we are still far from where we would like to be as a team‚ and while it is disappointing‚ it has given us a good idea of where we are currently and what we need to work on.”

England only finished third in the Under-20 Six Nations‚ which is a further reminder to the Junior Boks that they are way off the standard required.

Ireland won the Under-20 Six Nations‚ winning all five matches‚ while France finished second despite losing to England and Ireland. The English slipped up against Wales‚ underlining just how competitive the northern hemisphere teams will be at the global showpiece in June.

France won the Under-20 World Championships last season and England have been in the last six finals since 2013‚ winning three of them.

The Junior Boks have only once won the title – on home soil in 2012 – while they also lost the 2014 final against England by a point. For the past two seasons SA has finished third at the tournament.

SA are drawn alongside New Zealand in Pool C of the tournament‚ which also features Georgia and Scotland.

The top team in each of the three Pools advances to the semi-finals with the best second-placed team across the three groups taking the fourth semi-final place.

“It definitely was a tough and physical game‚” said Junior Bok Chean Roux after the England match. “We were totally outplayed; they were the better side on the day.

“We will have played five matches before the World Rugby U20 Championship. This was a tough lesson‚ but that is what the competition is about.”

The Junior Springboks will face Wales in their last international friendly‚ which will be hosted at the Vale Resort outside Cardiff on Tuesday.