Buthelezi to captain Junior Boks at U-20 world champs 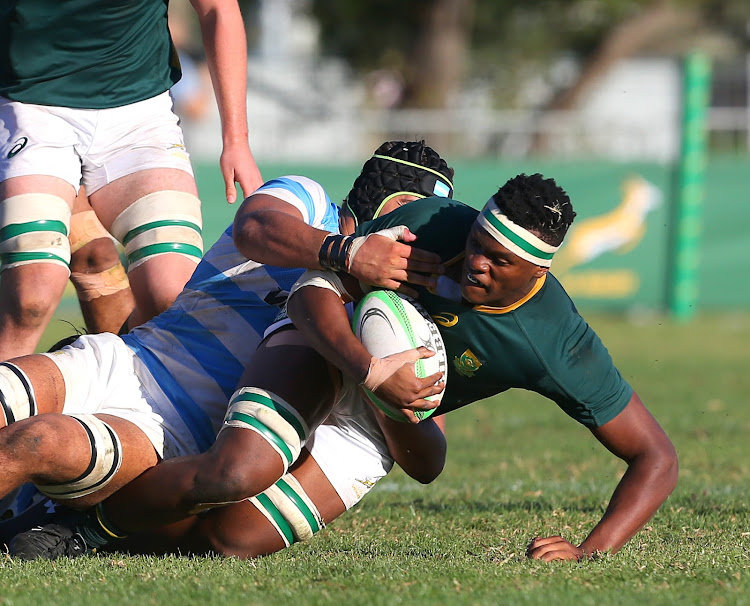 Phendulani Buthelezi of Junior Springboks during the Under 20 International Series match between South Africa and Argentina at Paul Roos Gymnasium on April 17, 2019 in Stellenbosch, South Africa.
Image: Carl Fourie/Gallo Images

For the first time the junior and senior Springboks will both be captained by black Africans after Phendulani Buthelezi was named skipper of the SA Under-20 team on Tuesday.

Looseforward Buthelezi will lead the Junior Boks at the 2019 World U-20 Championships in Argentina next month.

The 28-man squad‚ made up of 16 forwards and 12 backs‚ features four players who participated in the tournament last year for the global showpiece in Argentina from June 4 to 22.

Buthelezi (loose forward)‚ Rikus Pretorius (centre) – who was named as the co-vice-captain – David Coetzer (flyhalf) and Asenathi Ntlabakanye (prop) are the four members of the squad who won the bronze medal at the 2018 edition of the event in the south of France. Looseforward Francke Horn is the other co-vice-captain.

All of the players in the squad with the exception of Davids‚ Dian Bleuler (prop)‚ Vaughen Isaacs (fullback)‚ David Coetzer (flyhalf)‚ David Kriel (utility back)‚ Elrigh Louw (lock) and Mnombo Zwelendaba (centre) travelled with the team to the UK last month for the warm-up matches against England and Wales.

Coetzer‚ Kriel‚ Louw and Zwelendaba all ran out for the side in the U20 International Series in April against Georgia‚ Argentina and the Namibia XV.

“We selected a squad that shows a good mix of players who have featured at a few different levels of the game‚ both at junior and senior level‚ as well as a number of talented young players‚” said coach Chean Roux.

“We had to make a few tough calls as always‚ but we had to select the players we thought have what it takes to compete against the best U-20 players in the world.”

Roux was confident in his core leadership group and said: “Phepsi and Rikus were both members of our squad that played in France last year‚ so they know exactly what to expect on the field as well as off the field.

“The tournament involves a fair bit of time away from home and it is demanding on the players both physically and mentally‚ so it will be good to have leaders who can prepare their teammates for this in advance.

“Francke also led the team with distinction in the role of both captain and vice-captain during our warm-up matches‚ and we are equally confident in his abilities as a leader.”

Roux’s team will wrap up their preparations at their base in Stellenbosch in the next three weeks‚ with the team departing for Argentina on Wednesday‚ May 29.

The Junior Springboks will be based in Rosario for the duration of the U-20 Championship where they will meet Scotland in their opening match on Tuesday‚ June 4‚ before taking on Georgia (Saturday‚ June 8) and New Zealand (Wednesday‚ June 12) in their remaining pool matches.

The semifinals will be contested on Monday‚ June 17‚ and the final on Saturday‚ June 22.

Junior Springbok squad for the World Rugby U-20 Championship (in alphabetical order):