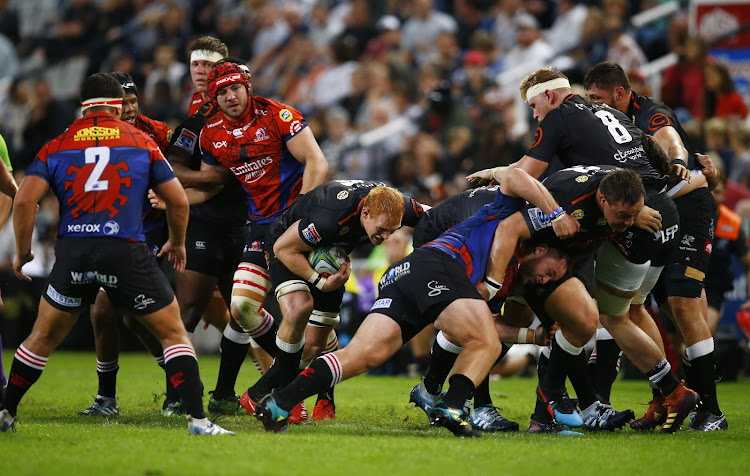 Philip van der Walt of the Cell C Sharks with ball on attack during the Super Rugby match between Cell C Sharks and Emirates Lions at Jonsson Kings Park Stadium on May 25, 2019 in Durban, South Africa.
Image: Steve Haag/Gallo Images

Curwin Bosch was at the heart of an efficient Sharks performance that saw them record a rare South African derby double when they beat the Lions 27-17 at King's Park on Saturday.

Bosch won the battle of the flyhalves against Elton Jantjies with 17 points and an astute tactical display.

While Jantjies had an adequate outing, he was let down by his forwards and also contributed two of the Sharks' three tries.

The Sharks' sixth win of the season saw them move from bottom to second on the SA conference with 33 points, three behind the log-leading Jaguares.

The Sharks made their physical dominance count with tries from Bosch and Daniel du Preez.

The Sharks should have had more to show for their hegemony, especially when Bosch missed an early 12th minute penalty.

However, he redeemed himself when he intercepted an inside pass from Elton Jantjies, from where he motored 57 metres to score in the 17th minute.

Six minutes later, the Sharks finally translated their physical dominance into points when Du Preez crashed over from a rolling maul.

While the Lions struggled up front, their backs were a handful when they had some front-foot ball.Lionel Mapoe's 31st minute try was a result of silky interplay between Courtnall Skosan and Jantjies.

Mapoe was the beneficiary of the move and the Sharks' confusion.The Lions though also had the bigger share of the territory and the possession but didn't have anything to show for it on the board.

The visitor though leveled the scores through Cyle Brink's 49th minute try that had its origins through the backs.

Aphiwe Dyantyi made the initial touchline break from his own half and when Mapoe made the secondary incision, the Sharks defence was fractured and Brink sauntered over near the posts.

The Lions then embarked on another period of dominance without reward.It actually ended up in a 60th minute intercept try by Makazole Mapimpi, who snaffled a Jantjies pass on his 5m line and motored 95m downfield.

It was a sickening try for the Lions to concede as they went through 16 phases before they lost their nerve.

Had the Lions scored, they would have taken the lead but more mistakes were to follow.

They had two crucial opportunities to take the lead through Mapoe and Reinhard Nothnagel in the 71st and 73rd minutes. Mapoe was scragged by Mapimpi and lost the ball with the try-line beckoning while Nothnagel's 73rd minute effort was disallowed by referee Marius van der Westhuizen.

Jantjies's 74th minute penalty was cancelled out by Bosch three minutes later, condemning the Lions to another SA derby defeat.