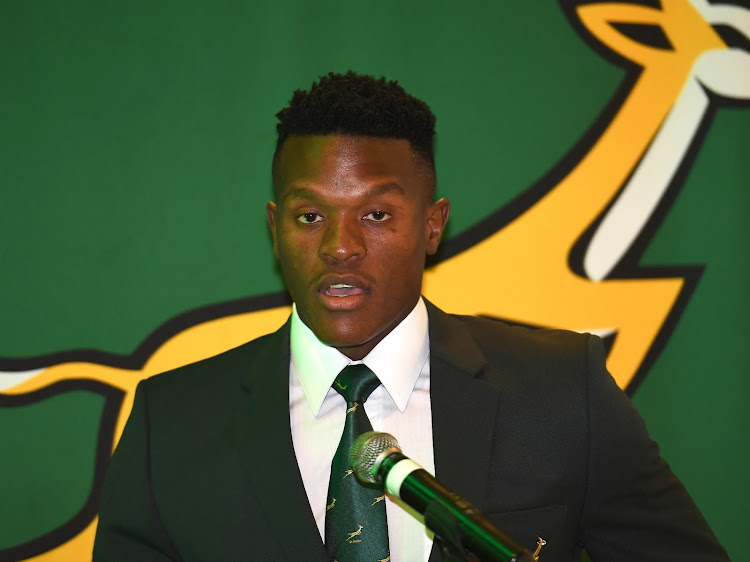 SA Junior Springboks captain Phendulani Buthelezi speaks to the media during the Under-20 Springbok presentation ceremony in Stellenbosch on May 27 2019.
Image: Ashley Vlotman/Gallo Images

Junior Springbok captain Phendulani Buthelezi says he is ‘hungrier than ever’ to bring the U20 World Championship title back to South Africa for the first time since 2012.

The Junior Boks are in Rosario for the tournament and were slowly getting the cobwebs out after a 44-hour journey to the Argentinean city.

Buthelezi is at his second U20 World Championship‚ having joined the squad as a replacement in France last year. On Saturday‚ as the proud skipper of his country‚ he attended media obligations with the captains from the other nations.

The competition – which features the 12 best U20 teams in the world – kicks off on Tuesday‚ 4 June‚ when the Junior Springboks will take on Scotland in their opening encounter at the Racecourse Stadium in Rosario.

The Sharks’ Super Rugby play-off ambitions hang by a thread after the Hurricanes scored a 30-17 win at King’s Park on Saturday to end a four-match ...
Sport
3 years ago

“It was a very special moment to see the trophy close up‚” said Buthelezi.

“We have been working very hard in the last few months to get here‚ so to see the Cup we are playing for was really extraordinary. It made me even hungrier to go out there and see our team perform for our country.

“Having the opportunity to interact with some of the other captains certainly put things into perspective about what lies ahead.

"It definitely hit home that we are here to give our best and compete for the trophy.”

Lions class too much for Stormers

The Lions gloriously played themselves back into Super Rugby contention here on Saturday.
Sport
3 years ago

Buthelezi said the team had settled in well since arriving in Argentina and that they are itching to run onto the field.

“We started our preparation soon after we arrived in Rosario‚ and since then the players have adjusted well to the time zone and have put in a big effort at training‚” said Buthelezi.

“We have been working hard on the detail in our game‚ and we are burning to get out there and take on Scotland.”

The SAU20’s will face Georgia on Saturday‚ 8 June‚ and New Zealand on Wednesday‚ 12 June‚ in their remaining pool matches‚ with the semi-final playing out on Monday‚ 17 June‚ and the Final on Saturday‚ 22 June.