Stormers limping to the line 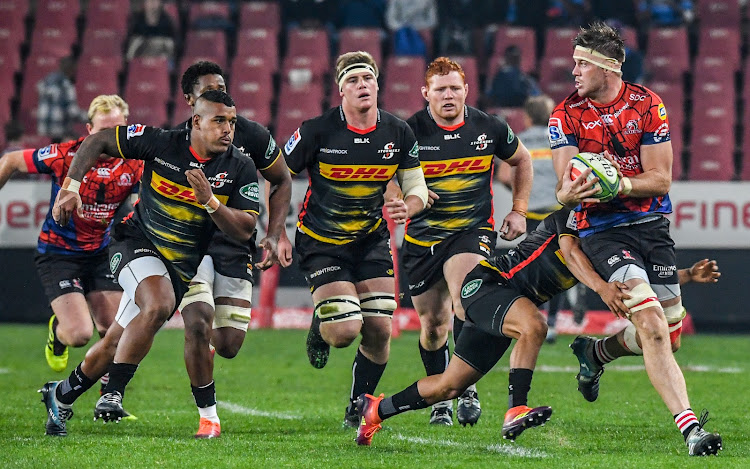 Stephan Lewies of the Lions with the ball during the Super Rugby match between Emirates Lions and DHL Stormers at Emirates Airline Park on June 01, 2019 in Johannesburg, South Africa.
Image: Sydney Seshibedi/Gallo Images

The Stormers are limping to the end of the Pool phase of Super Rugby‚ still in with a chance of making the play-offs but wondering if they will have any players left if they qualify for the post-season.

Injuries to locks Cobus Wiese and Eben Etzebeth during last Saturday’s 41-22 loss to the Lions at Ellis Park have added to coach Robbie Fleck’s problems.

Etzebeth suffered a suspected broken hand. He was at Stormers training on Monday but did not take part – his hand heavily bandaged. He will see a specialist on Tuesday.

Wiese was also absent from training with a hamstring injury – the extent has not been made clear. On the up side lock Chris van Zyl and Bok hooker Bongi Mbonambi were back at training.

He is out of the rest of the tournament due to a knee injury. The Bok skipper is also in a race to be fit for the Springboks’ international commitments in August.

Flank Pieter-Steph du Toit out for several more weeks with a shoulder injury‚ and Kobus van Dyk is also out for the remainder of the season.

The Stormers face the Sunwolves at Newlands this week‚ which is about the only good news for Fleck and his team.

The Japanese side are bottom of the standings with just two wins from 14 games.

They have conceded 501 points already this season and with several of their best players being rested for Japan World Cup training camps‚ they are in a state of disarray.

Although the Sunwolves have given the Stormers problems when they’ve met in Singapore and Hong Kong‚ they have been thrashed on their only two previous visits to Newlands.

Bok tighthead Wilco Louw says that the team are not using their lengthy injury list as an excuse and that they still had belief they would make the play-offs.

“We can definitely still make it‚ I have no shadow of a doubt about that‚ and my view is shared by everyone else in the squad‚” Louw said.

“There isn’t anyone who doubts we can still make the play-offs‚ either in the playing squad or the coaching group. All the players are determined to make the season a success and losing in Johannesburg hasn’t changed that.”