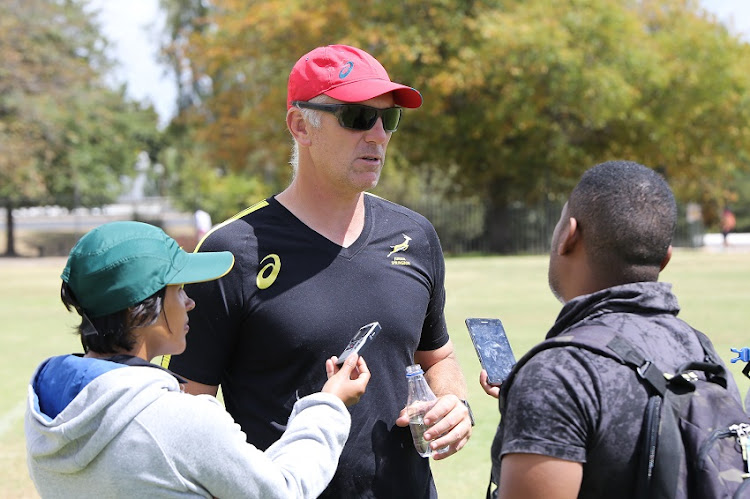 Junior Springbok coach Chean Roux made only two changes to the starting lineup that beat Scotland for today’s second Under-20 World Championship Pool match against Georgia.

Roux reshuffled his loose trio for the clash at the Racecourse Stadium in Rosario‚ with captain Phendulani Buthelezi switching from flank to No 8 in place of Francke Horn‚ who returned home due to a shoulder injury. Gumede and Dylan Richardson were handed starts.

With Horn’s replacement‚ Janko Swanepoel (lock) only arriving in Argentina on Friday‚ Roux named only 12 replacements on the bench – of which eight will be allowed to take the field.

“We looked at Georgia and I thought the boys had a good start against Scotland earlier in the week‚ so I wanted to keep the momentum‚” said Roux.

“Obviously one change was a forced due to Francke’s unfortunate injury‚ so there are only two changes for this game.”

Roux said his charges were ready for a physical onslaught against Georgia‚ who they last met in the U-20 International Series in Paarl in April‚ as part of their preparation for the World Rugby U20 Championship. The Junior Springboks won the match 58-10.

“We have played against Georgia two years in a row now and they are definitely physical‚” said the coach.

“They have probably the best scrum at U-20 level‚ and we need to be ready for that. But we know what to expect from them‚ and we are looking forward to the challenge.”

Roux emphasised the importance of starting strongly as one of the key areas going into the match‚ with only one pool game remaining after this encounter to stake a place for a semifinal berth.

“We didn’t get off to a good start in the clash again Scotland after the long trip to Argentina‚ the fact that it was the first time we played on a synthetic pitch‚ and it was wet‚” said Roux.

“So we would like to start the way we finished against Scotland and try to maintain that momentum going into the second half.”

The Junior Springboks will meet New Zealand in their final pool game on Wednesday‚ June 12. The top team in each of the three pools and the next best-placed team on the log table in the competition will advance to the semifinals on Monday‚ June 17‚ with them winners meeting in the final on Saturday‚ June 22.

Meanwhile‚ South African referee Rasta Rasivhenge will also take to the field in the showpiece on Saturday as he takes charge of the match between France and Wales‚ also at the Racecourse Stadium.