Aphiwe Dyantyi about to hit his stride 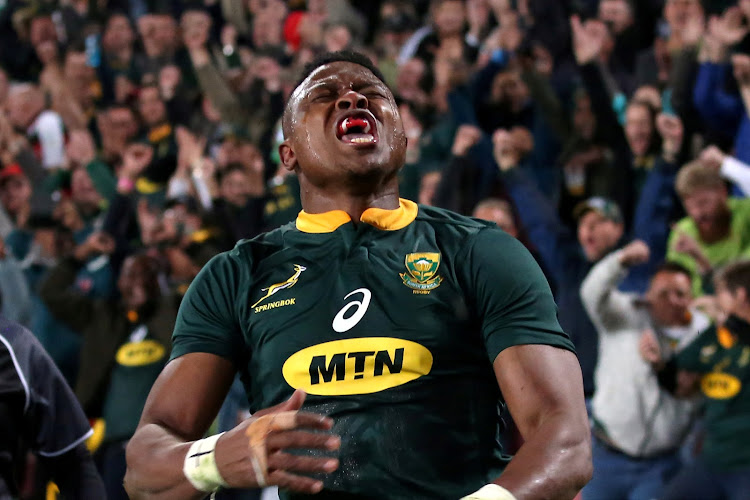 The world’s breakthrough player from last year‚ by his own admission‚ is yet to break into a proper sweat this time round.

Aphiwe Dyantyi took the rugby world by storm last year but this year‚ almost as expected‚ his advances have been far more measured.

“Coming from last season there was probably a lot of expectation‚” conceded Dyantyi on Tuesday.

“It hasn’t been easy coming from last season. I struggled with a lot of niggles at the start of the season.”

He says credit must go to the Lions’ coach Swys de Bruin and the medical staff who gave him time off to go for rehab.

“I’m enjoying the space that I’m in‚” said Dynatyi as a result.

Those niggles have meant him vacating the blocks with less alacrity this season but he feels he is about to hit his stride.

The Stormers‚ Sharks‚ Bulls and Lions are all in a fight for four play-off berths along with the Highlanders‚ Rebels‚ Chiefs‚ Waratahs and Blues in ...
Sport
2 years ago

“I’m not where I want to be‚ ideally. I’m happy with where I am because I’m steadily building‚ also where the team is at. This is a good launch platform.”

If he senses his best is yet to come‚ the same he contends‚ apply to the Lions who have to win their last league match against the Bulls on Saturday to secure their spot in the quarter-finals.

They are‚ however‚ without loose forward Kwagga Smith‚ loose head prop Sti Sithole‚ lock Stephan Lewies‚ as well as regular captain Warren Whiteley who is still on the injured list.

“I think what the people on the outside don’t account for is the role and impact players like Warren and Kwagga still have even when they are not playing.

"It is immense. We take confidence from them.”

To some the trip to Loftus now seems daunting compared to the journey the Lions made up the N1 in recent seasons.

Asked if there was something ‘missing’ after they had lost so many senior players over the last few seasons‚ Dyantyi went philosophical on his inquisitor.

“I would imagine Lionel (Mapoe) thought the same thing the first time he played with me‚" he said.

“In a sense it has given a good platform to a lot of new guys.

"Tyrone (Green) is an amazing example‚ Hacjivah (Dayimani)‚ Wandi (Simelane) all these guys got an opportunity.”

He believes comparisons between the current crop of Lions’ and their predecessors who reached three consecutive Super Rugby finals are odious.

The Lions’ Super Rugby quarterfinal prospects hanging by a thread

The Lions’ prospects of again going deep into the business end of Super Rugby hang by a thread.
Sport
2 years ago

“A lot of people are referencing that‚" he said.

"We can’t compare with what has happened in the past. We have new players and we have tried new things.

“I would imagine Lionel (Mapoe) thought the same thing the first time he played with me. There was no Courtnall (Skosan) next to him.

“In a sense it has given a good platform to a lot of new guys. Tyrone (Green) is an amazing example‚ Hacjivah (Dayimani)‚ Wandi (Simelane) all these guys got an opportunity.”

He believes the Lions can make reach the quarterfinals and it doesn’t matter where they go and play it.

“If‚ as humans we have our way‚ the world would be chaos‚" he said.

"You don’t always get things how you want them. We do with the cards we are dealt. We are professionals and roll with the punches.”