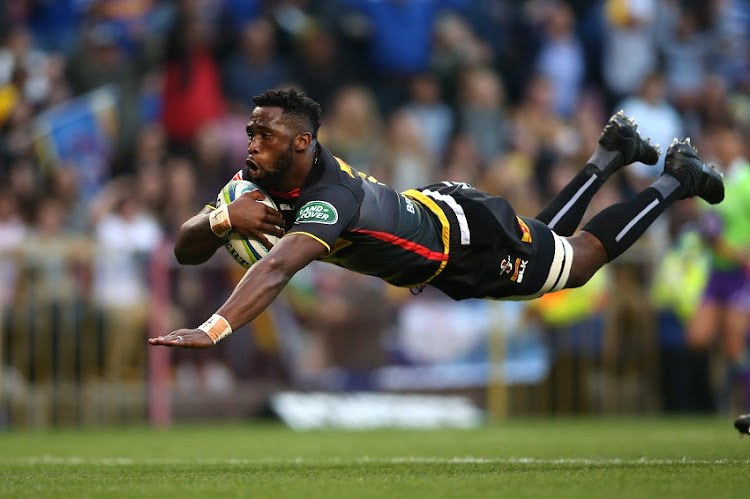 Stormers captain Siya Kolisi dives over to score the opening try during the Super Rugby match between DHL Stormers and Crusaders at DHL Newlands Stadium on May 18, 2019 in Cape Town, South Africa.
Image: Shaun Roy/Gallo Images

Springboks captain Siya Kolisi has been ruled out of the Rugby Championship matches against Australia and New Zealand as he recovers from a serious knee injury.

Kolisi‚ who is in the Springboks camp undergoing rehabilitation from the injury he suffered during Super Rugby‚ is also doubtful for the successive Rugby Championship matches against Argentina.

Given that the World Cup is less than three months away‚ Springboks coach Rassie Erasmus decided against rushing Kolisi back into action in the matches against Australia and the All Blacks.

The Bok skipper could play a few Currie Cup matches to get fitness.

“We are a little bit more conservative with Siya to make sure that he is ready for the World Cup‚ which is the most important tournament of the year‚” said Erasmus.

“He (Kolisi) has more or less the same injury as Warren Whiteley who is out for a long time.

"He is getting his scan results on Friday and we will take it from there.

"The most probable route is that he will come back after the scan on Friday‚ he is training with us until we get on the plane to New Zealand.

"Or he will stay behind to play one or two Currie Cup games before probably returning to Test rugby in our last game against Argentina.

“If we push him too early for the match against Australia and New Zealand‚ that will create a big doubt with regards to the World Cup.

"We rather be conservative and make sure that he goes to the World Cup.”

Erasmus is yet to decide on the man who is set to lead the Boks in Kolisi's absence but he has options among the leadership group unlike last year.

“In terms of captaincy‚ that brings a few role players into contention‚" he said.

"PST (Pieter-Steph du Toit) will also be in contention‚ Duane Vermeulen will be one of the obvious choices‚ Beast Mtawarira needs some game time‚ Steven Kitshoff and Malcolm Marx have also captained.

"We will make the call on Monday but there are good options compared to last year.

"The captain will probably come from those guys for the first two Test matches.”

Erasmus added that he may have to rotate a few players for the first two matches because of the traveling.

“The first two games will be a challenge playing on a Saturday in South Africa against Australia and then flying out on a Sunday to New Zealand and only getting there on a Tuesday morning‚" he said.

"We will probably mix up the first two games in terms of personnel and when I say that it won’t necessarily be an A and B side‚ it is because there are few guys who need game time.

"We probably can’t take the first-choice team to New Zealand because there are a few guys who would not have played a lot in recent weeks.

"So‚ we are going to juggle the squad in terms of how we split the two teams against Australia and New Zealand to make sure that both teams are competitive.”